What To Do When You Only Have One Day In Disneyland

What To Do When You Only Have One Day In Disneyland 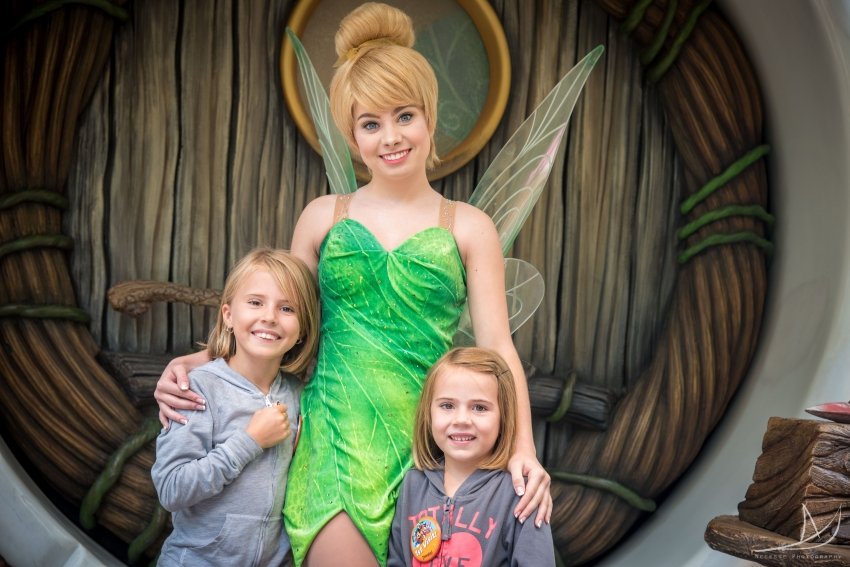 With only one day in Disneyland we wanted to make sure we did it right. We wanted the girls’ first experience at the “Happiest Place On Earth” to be as magical as could be.

We figured with with one day there, the whole experience would be exciting, magical, overwhelming, and out of this world. Also, we figured that by only attending the park one day we would save ourselves some money (on tickets, on hotels, on food), and avoid the attractions from becoming redundant. 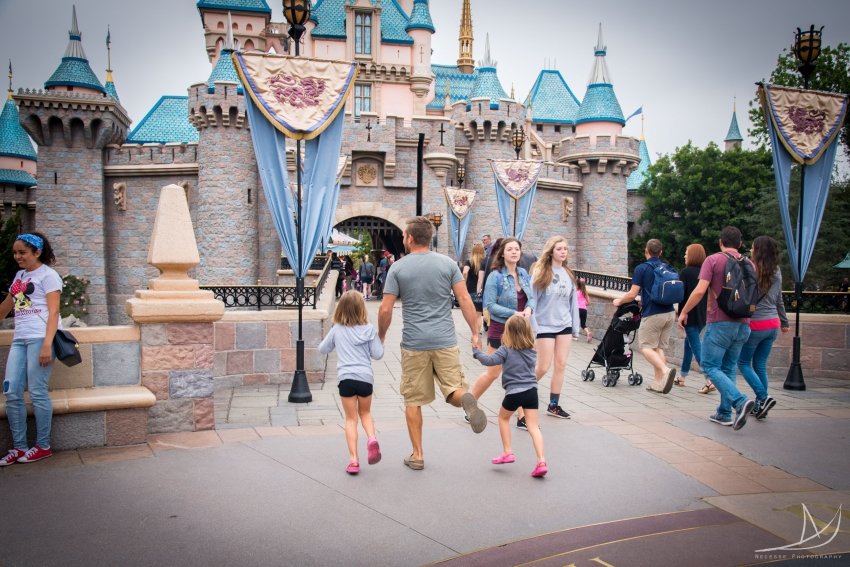 Tips For Surviving One Day At Disneyland

The night before hitting the park we sat in front of the computer and did our research. We read other blogs. Read “tips and tricks” pages. Checked out where all the attractions were situated, and we looked over the disneyland app.

With the help of this one blogger’s post, and some feedback on facebook, we figured we had a handle on what rides were worth doing. We felt ready. 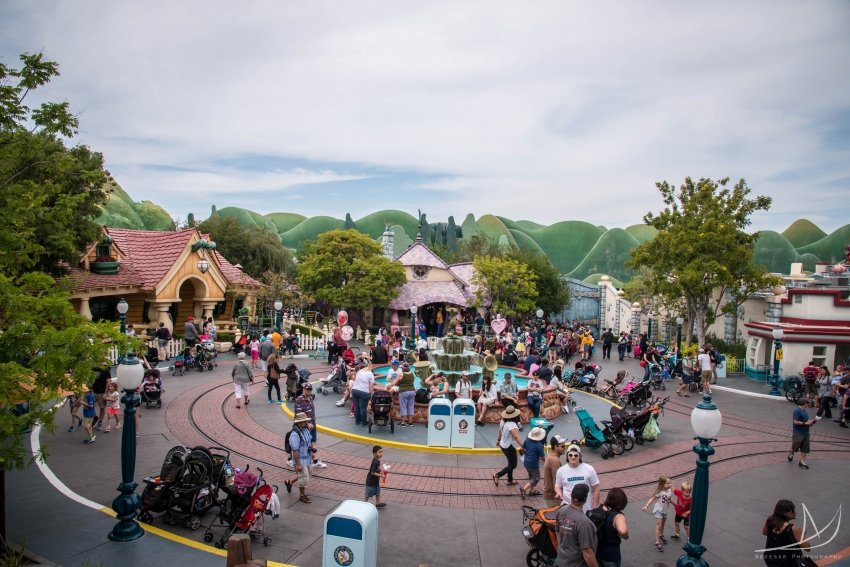 Even with all of our planning, we had to remind ourselves that this trip was not for us; it was for the girls. We wanted to let them decide what they wanted to do and all we could do was make some educated suggestions. Thankfully for us, the girls ended up having a lot of the same desires as we did.

Disneyland is overwhelming no matter what. We didn’t want to add to that and end up with kids that cry the whole time. This was going to be a HAPPY experience. 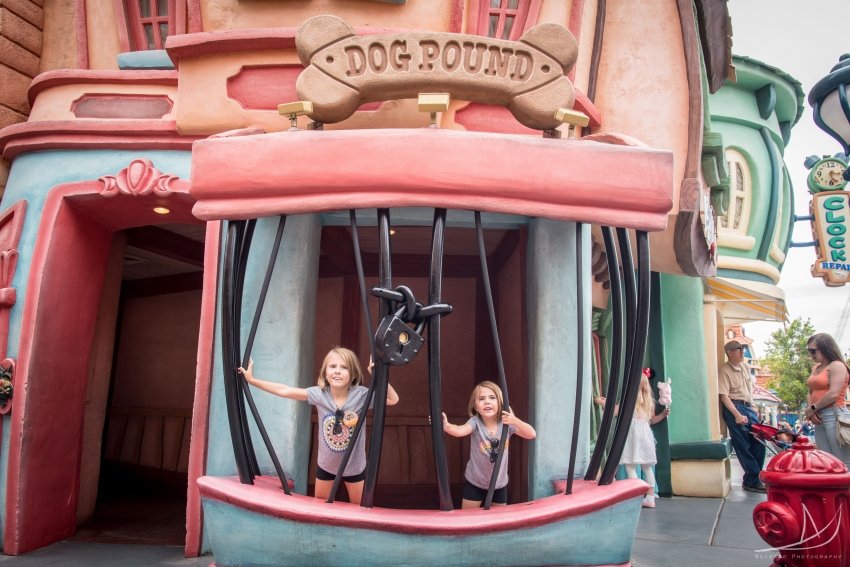 In California you will find both Disneyland and the Disney California Adventure Park. They are right across from each other.

Disneyland offers everything from single day to multi-day passes, but they also offer single park, or Park Hopper passes, where you can hop between the two parks.

Do your research, see what attractions are on each side, guestimate how much time you think you will want in a single park, and then decide which ticket will suit your needs.

Good to know: The bigger rides at Disneyland have a minimum height requirement of 40″, except for the Matterhorn which was 42″.

WE GOT 1 DAY, SINGLE PARK PASSES. With the age of our girls, and their desires to meet most of the princesses, Disneyland was the park that checked most of our desires. It has age-appropriate rides, the Disney characters, and the MAGIC that you want for your first Disney experience. 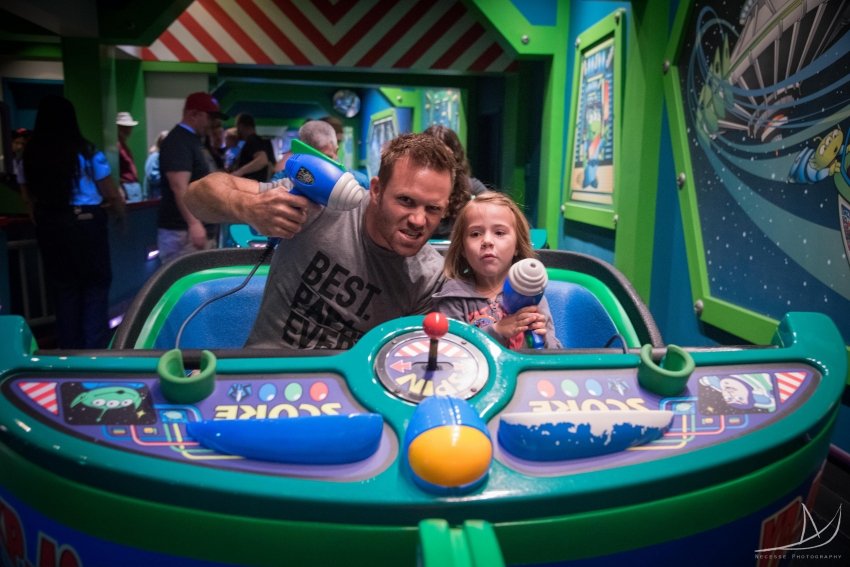 Disneyland offers buttons if it is your First Time, Birthday, Anniversary, etc etc. We got our First Time badges, which added a little extra magic as all of the characters we met throughout the day used that as a cue for conversation.

Eben also had the smart idea to use the backside of these buttons as an “identity card”. He wrote the girls’ names on them, as well as our names and cell numbers in case we ever got separated from the girls. We showed the girls who the park staff are (they all wear white circular name tags), and told them that if ever they got lost to find one of them and show them the pin. 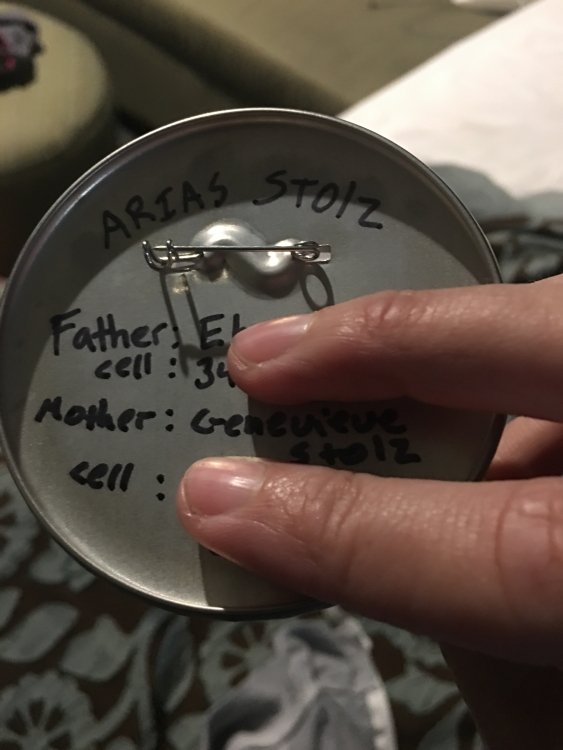 Get There At Opening

The park is noticeably calmer at opening. When noon rolled around it felt like the attendance in the park doubled! By getting there early you can avoid a long wait at the security check-point, and subsequently for a lot of the rides.

We had been told that Fantasyland does not offer FastPasses (more about these in a bit) and to head there first to avoid the line-ups that would get really long later in the day. While the girls and I stood in line to meet Ariel (we couldn’t just walk passed her to get a jumpstart on the lineup, this day was about them!), Eben went to pick up our first fast passes for Splash Mountain.

Once we were reunited and the girls had had their chance to tell Ariel that they also have mermaid tails, we headed towards Fantasyland. While Eben stood in line for that ride, holding the spot for our whole family, the girls and I walked around looking to meet more princesses. 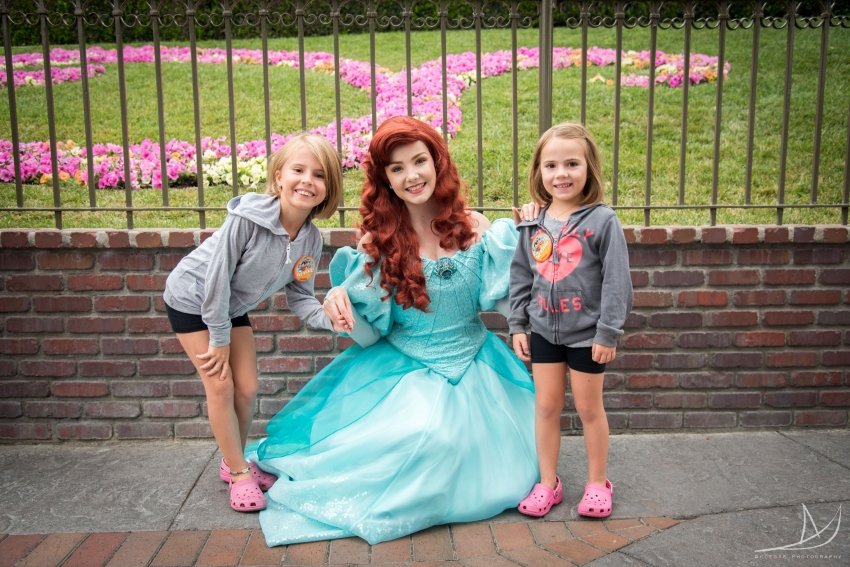 Use The FastPass System

A handful of rides in the park offer FastPasses. These are tickets that give you a future time slot at which you can return to the ride and skip the long wait in line. Instead you go into the FastPass line-up which is insanely shorter.

We found the best system for getting FastPasses was, while the girls and I stood in line to meet princesses or in line for rides without FastPasses, Eben would walk to the nearest FastPass ride and get tickets for that one. In general this meant that we could do 1-2 princesses and then go hit up one of the FastPass rides.

You can’t collect FastPasses for all the rides at once. On the lower half of the FastPass ticket it will tell you at what time you can go and get another. As long as you stay on top these passes and your time slots for getting more, they are an extremely helpful way to get on to the rides quicker. 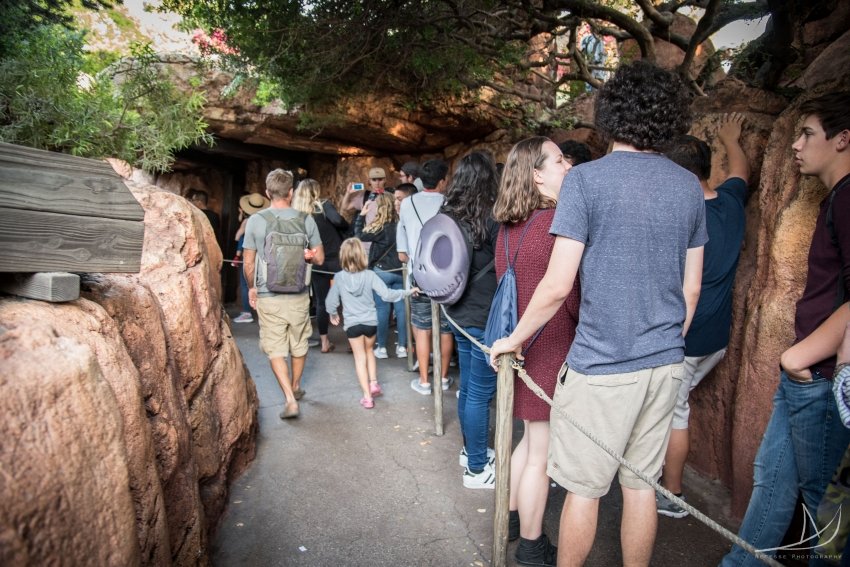 Us walking in the FastPass lane, compared to the busy “regular” lineup to the right 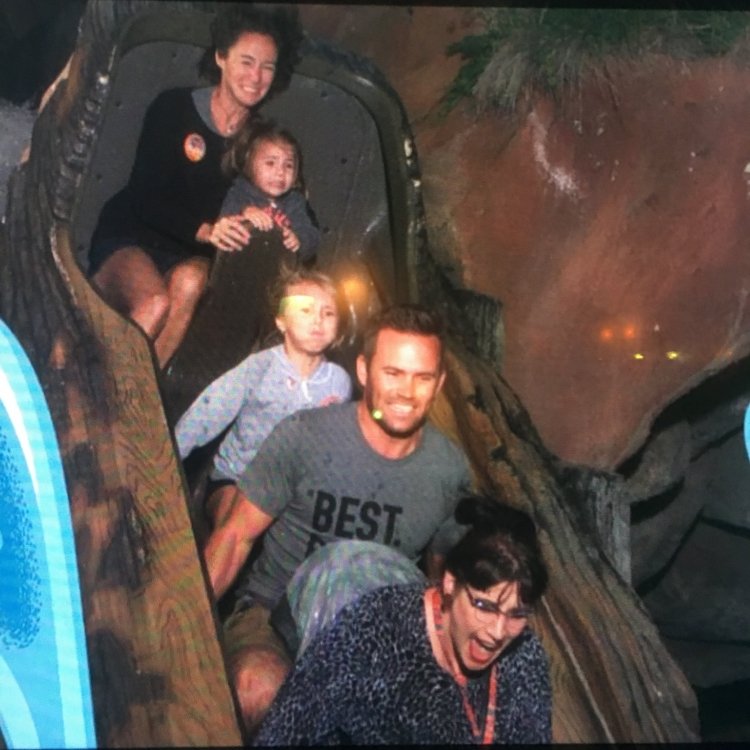 Ellia claims this is her favorite ride, Splash Mountain. I think her face says otherwise!

Bring Snacks And A Water Bottle

With all the running around you are going to want to hydrate and the pick-me-up of snacks, but you won’t want to pay the resort costs for food every time you get munchie.

We had a bunch of granola bars and a water bottle we could refill every time we passed a water fountain. These worked wonders for us when we were in longer lines and the girls were running low on energy. 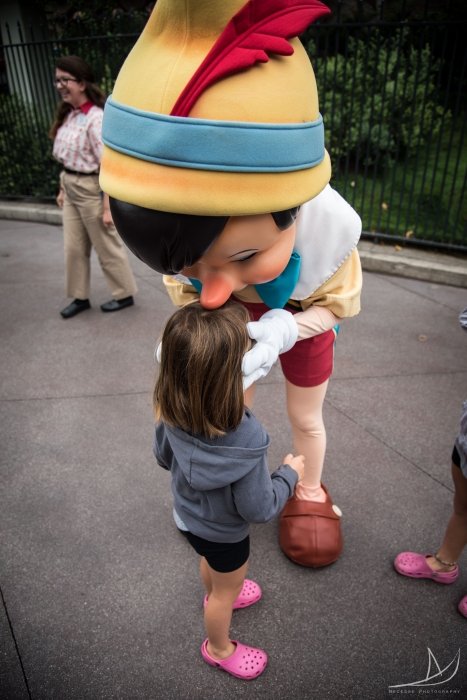 Disneyland was great. We met a lot of characters. We did all the big rides and many of the smaller rides. There was a lot of laughing, and we had a lot of fun. The experience was as Magical as we had hoped for.

The experience was so full-on that I don’t think I would have the energy to do it a second day. Maybe we would’ve gone a bit slower had we been expecting a second day in the park, but realistically, probably not! 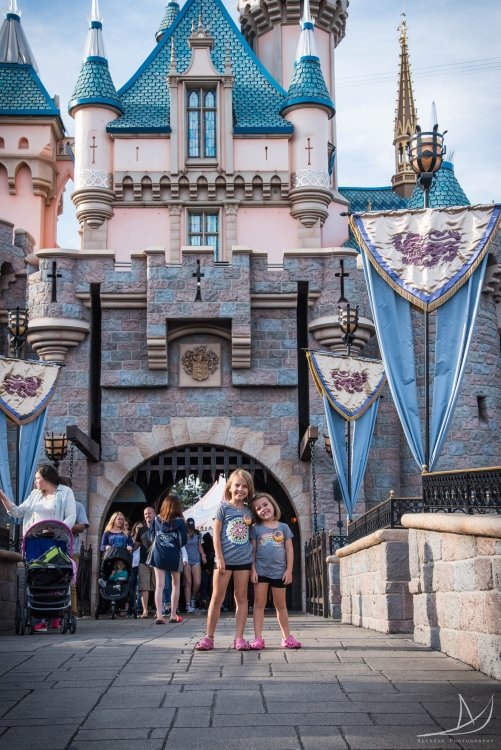 By 8pm the girls were exhausted and while we were standing in line for the Pirates of the Caribbean ride (a must-see), they asked if we could do one more ride and then go home. We explained to them that this would mean we would miss the Light Parade and the Fireworks, but both were ready to call it quits.

As we left the park the parade had started and so they got to see some of it as we walked alongside the parade until the exit. And then once we reached our hotel, fed the girls and had them ready for bed we hear BOOM BOOM! We ran outside and saw that we had a great view of the fireworks from the uncrowded parking lot of our hotel! 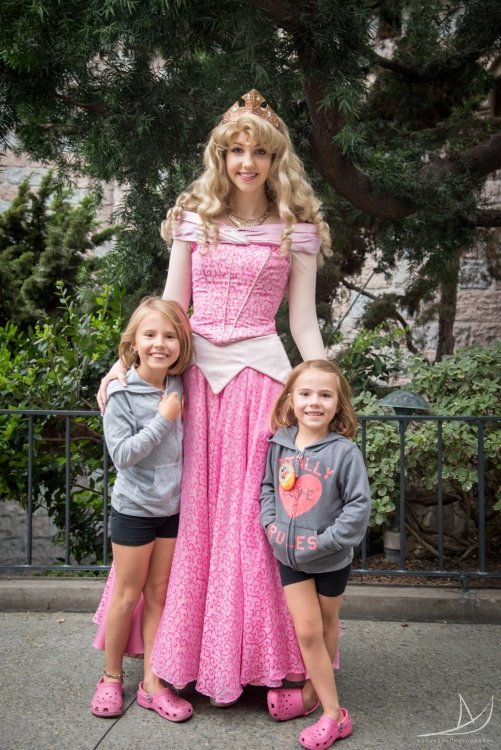 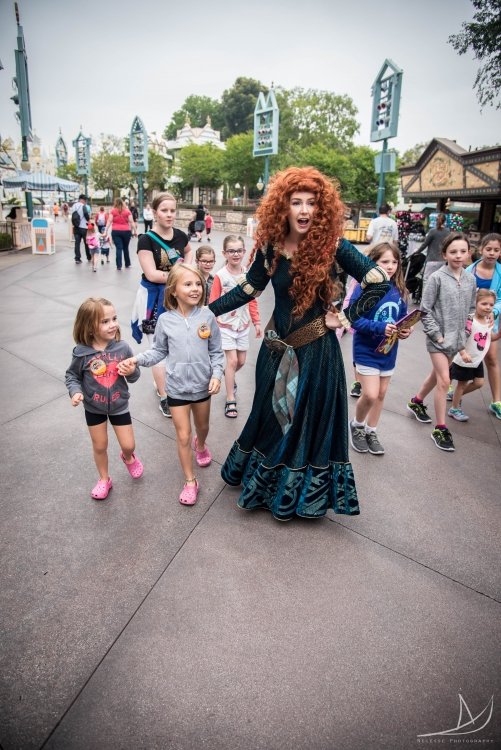 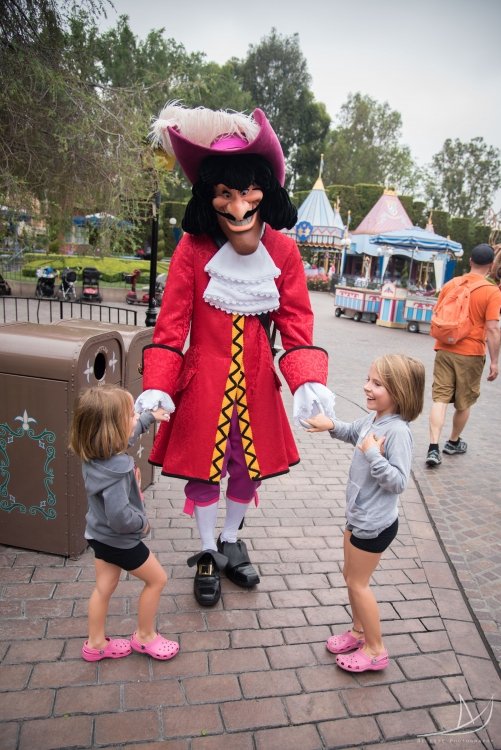 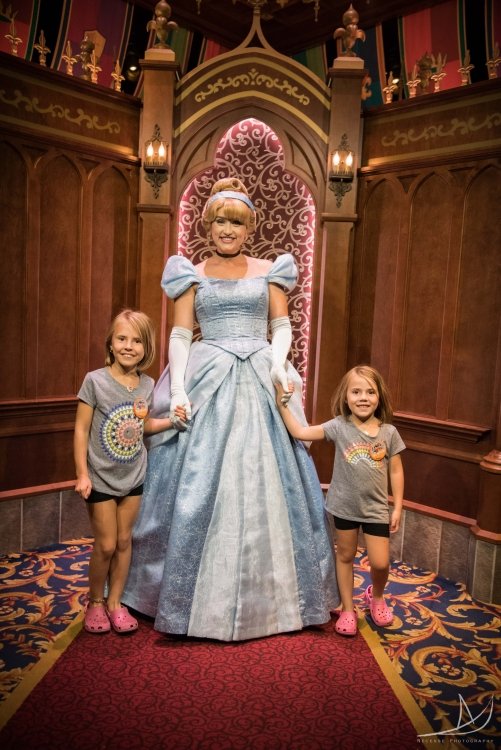 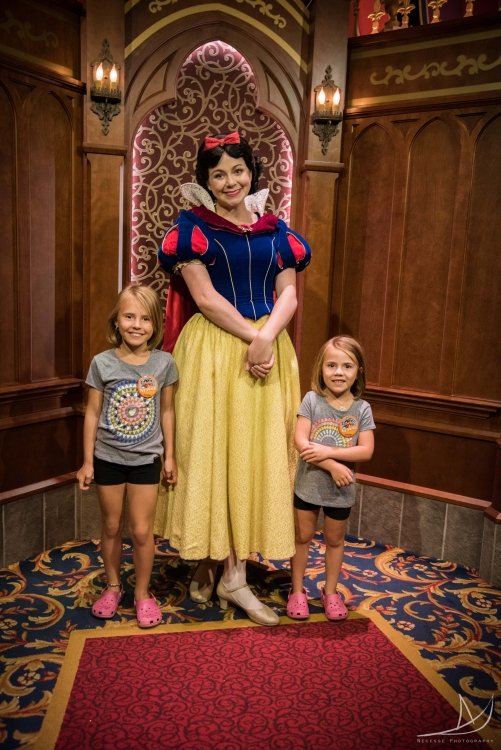 Final Tip: If your kids are anything like ours and tend to play with their hands and mouths a lot, bring a large amount of hand sanitizer with you! Disneyland has a lot of people, a lot of hands, and a lot of germs. Arias came down with the flu that night which lasted her two days. She is all better now. 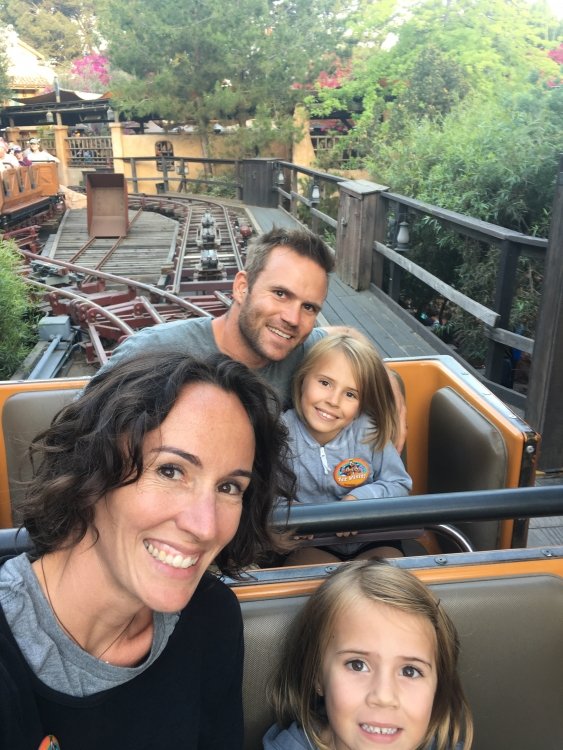