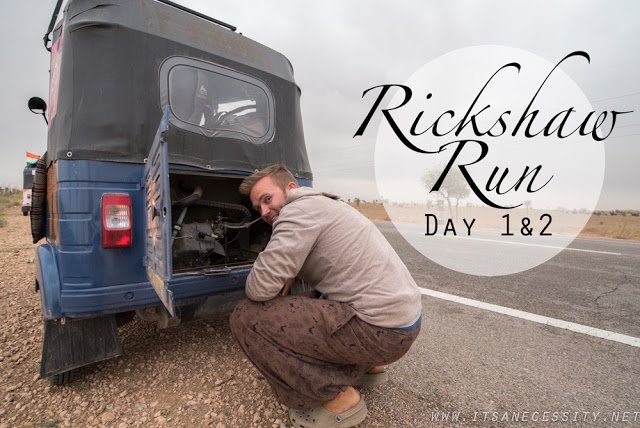 I won’t bore you with long stories of how we did a lot of driving, which we did. The days were long, we would start at about 8am and drive till nightfall. So there were many times when not that much was happening, but the highlights are what made our trip epic. And those are the ones I will tell you about.
Day 1 (total km’s for day 1: 217 km)

-All 84 rickshaws were told to meet at noon so that every tuk tuk could get our pictures taken while driving over the start line. What we neglected to realize until we were in a major bottleneck, was that every team just wanted to get on the road, and unfortunately for us, our rickshaw was parked near the back of the pack. So although we were there at noon, we did not get to hit the road until 2 hours later, having waited as everyone drove in a line for their photo op.
-7km from the start line we cross our first broken down rickshaw on the side of the road. We learned later that afternoon that they had blown their piston and had to get towed back. But it’s all part of the trip!
-As we were coming in to Chandon, this tiny roadside conglomeration of shops, Eben looked in our rearview mirror to see a monster cloud forming behind us. We talked with our travel buddies, Suk and Avi, and decided to pull over for some lunch and let it blow over, only to find out it was not just a cloud, it was a fast forming sand storm. We stood in awe, literally gawking, as this cloud of sand grew epically big and took over the whole sky. It moved towards and super speed and before we expected it, the air turned red, the wind was gusting signs off of restaurants, and it was all moving so fast and hard that it was inching forward our rickshaws which we had parked and left in 1st gear! The locals told us that a sand storm of that magnitude happens maybe once a year, if that, and that we were extremely lucky to be witnessing it. We were so happy that we had pulled over and could watch it from a semi-sheltered spot.
-Due to the late start, and then the sandstorm, and then the rainstorm, and then our engine bogging down, we ended up not making a huge amount of distance and driving into the dark of night in hopes of finding a hotel to sleep in. Instead we ended up in Balesar, a dodgy trucker town, where we slept in a brothel. But the restaurant we went to had some of the best food we ate the whole trip.
Day 2 (total km’s for day 2: 274 km)

-On some of the longer stretches we would get bored but luckily for us our travel buddies were really good at leaving their rickshaw signal light on, so we made a game of it and started chronicling how much of our trip would be made with their light flashing for km’s on end!
-We drove through a village that looked to have some sort of festivities happening. Our buddies thought it was maybe a market day or a wedding, and suggested we stop and check it out. As we walked towards the event a crowd of people swarmed us, excited to see us “whities”! But then we found out that we weren’t crashing a party, we were crashing a funeral. OOPS! And we had created a scene. We took a few pictures of the group (upon their request), and then politely walked away, but not without one woman requesting Eben and I adopt her toddler son. We declined.
-Sometimes the roads were marked as one thing and turned out to be something totally different. Like this “secondary” highway that was supposed to be a great drive but ended up being a huge detour and road suitable for an ATV. But Eben attacked it at high speeds and turned those potholes into obstacles. I was flying around the back seat and when the road finally turned back into pavement we realized we had created a new squeak.
-Ended our night in the holy city of Pushkar. But we had arrived so late that it was already dark and all we wanted to do was eat and enjoy our beautiful hotel. 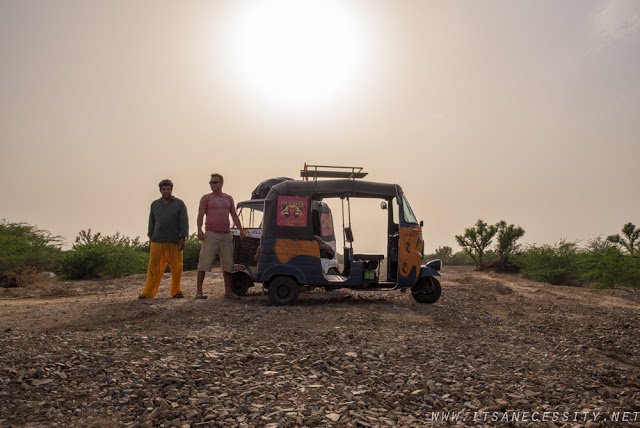