Travel With Children Is Beneficial To YOU

Home/Travel With Children Is Beneficial To YOU
Previous Next

Travel With Children Is Beneficial To YOU 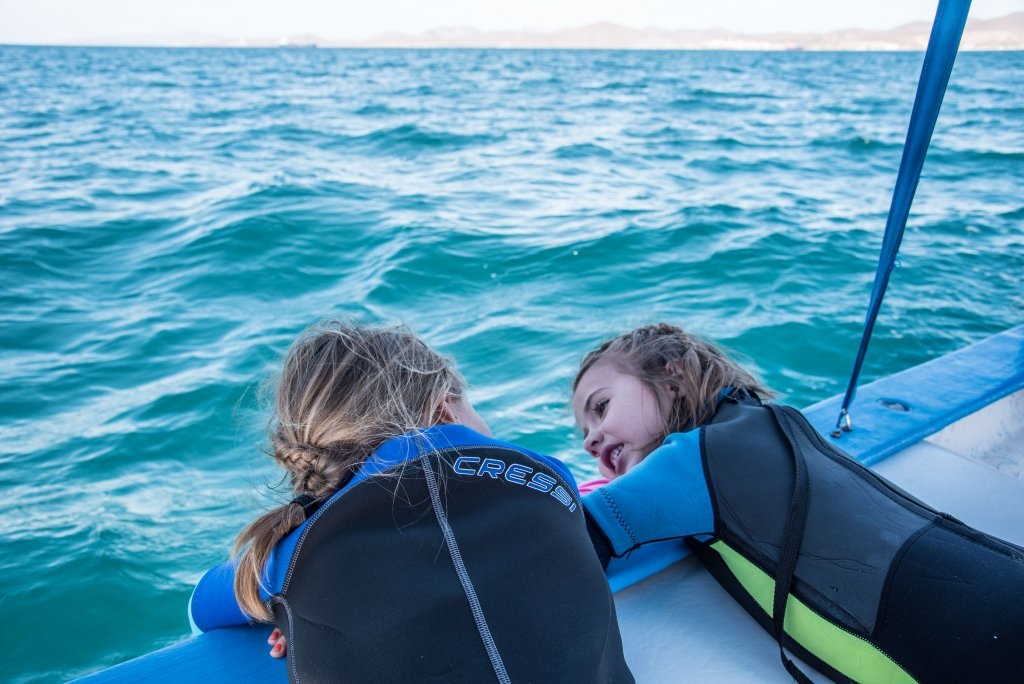 I’ve written posts before on how much travelling with your kids benefits their personal development. But one thing I neglected to mention is how much it benefits you to travel with your kids. When you are travelling do you consider “what does the world look like when you are only knee-height tall”? What does the road trip feel like when you have no real concept of time? How does the food taste when your taste buds have only been around for a handful of years? And selfishly, how much pride do you figure we get from being able to say really cool things like “my kids grew up on a sailboat”?

Short of having to make a few adjustments to deal with travelling with little people around, the gains in doing so are huge. 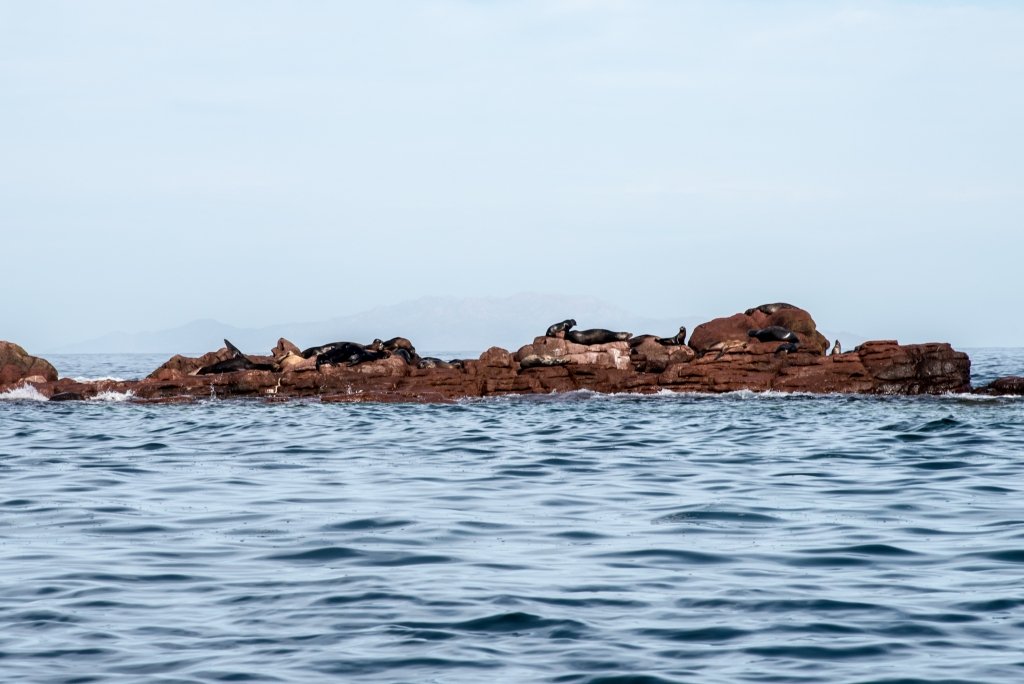 If I had a bucket list, this excursion would definitely be on it. Moving to Baja I knew that this would be a “must do” for our family. There is no way we could live in a location that is known for its many wildlife excursions and not go on at least one. So when we paired up with the Cortez Club to go and do two of these adventures in one day, I as an adult, was unbelievably excited.

The next best part was when I got to tell the girls! They excitedly began the countdown until the day they would be swimming with these beautiful underwater creatures.

On the day of the trip the Cortez Club was fully prepared for us, with mini wetsuits and flippers to outfit the girls in. That also caused for a lot of laughs. How do you stuff a five-year-old (with her still existing baby belly) into a skin-tight wetsuit? Check out the pic! Even this simple event of putting on wetsuits was a first for them! Coming from the Caribbean we had never needed these to go play in the water, but the Sea of Cortez is slightly chillier. The excitement was present in the girls’ eyes, and that amped us up even more. 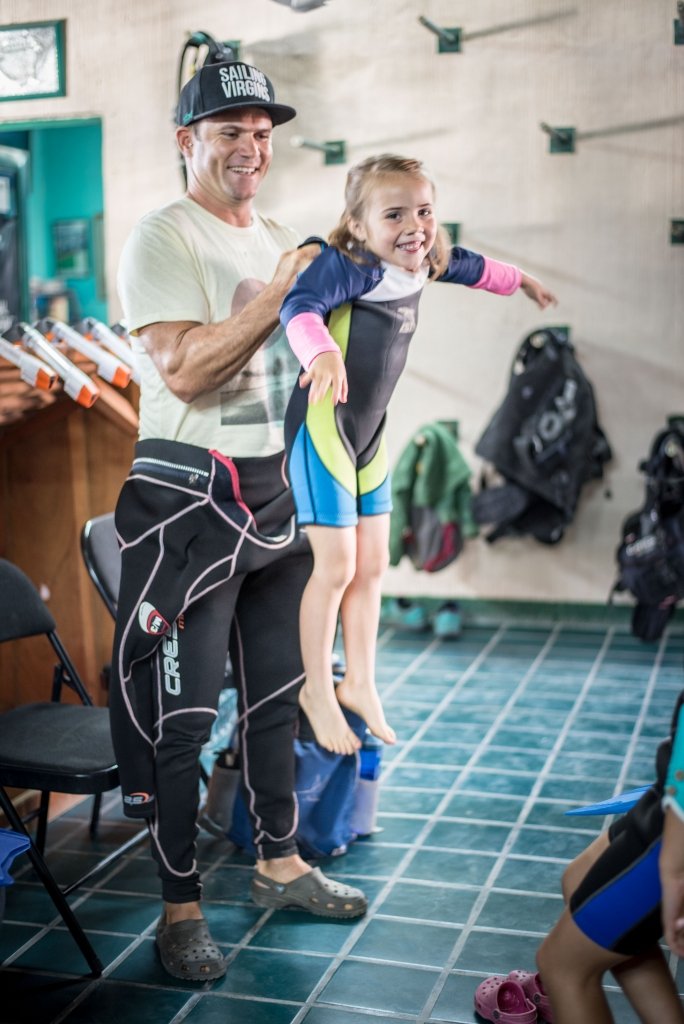 Getting to the sea lion spot was about an hour-long speed boat ride. The amount of pride that we felt watching the girls just being on the boat was big. Seeing the girls back in their element, on the water, knowing how to act on a boat, sitting calmly for an hour; it was nice.

After arriving and getting briefed on how to act in the water, while surrounded by sea lions, I could see slight hesitation in their eyes. Sea lion pups act just like real puppy dogs. They want to play, they get excited, they get up in your space, they nip at you, their fast…you get it. Ellia already struggles with LAND PUPPIES, how would she handle sea pups. Both girls conquered their fears and jumped in the water with us.

Within seconds we had sea lions, many of them, swimming around us, curious as to what we were doing there. It was such a cool experience. Our guide took us to several different spots, safely gauging the swell near the rocks so that the girls wouldn’t be overpowered by the water. We skirted away from areas where the sea lions were bigger than an adult-size me, and kept to areas with smaller ones. And by smaller, they were still bigger than both the girls. Can you imagine, being in the water with curious animals bigger than you swimming up and around you?! 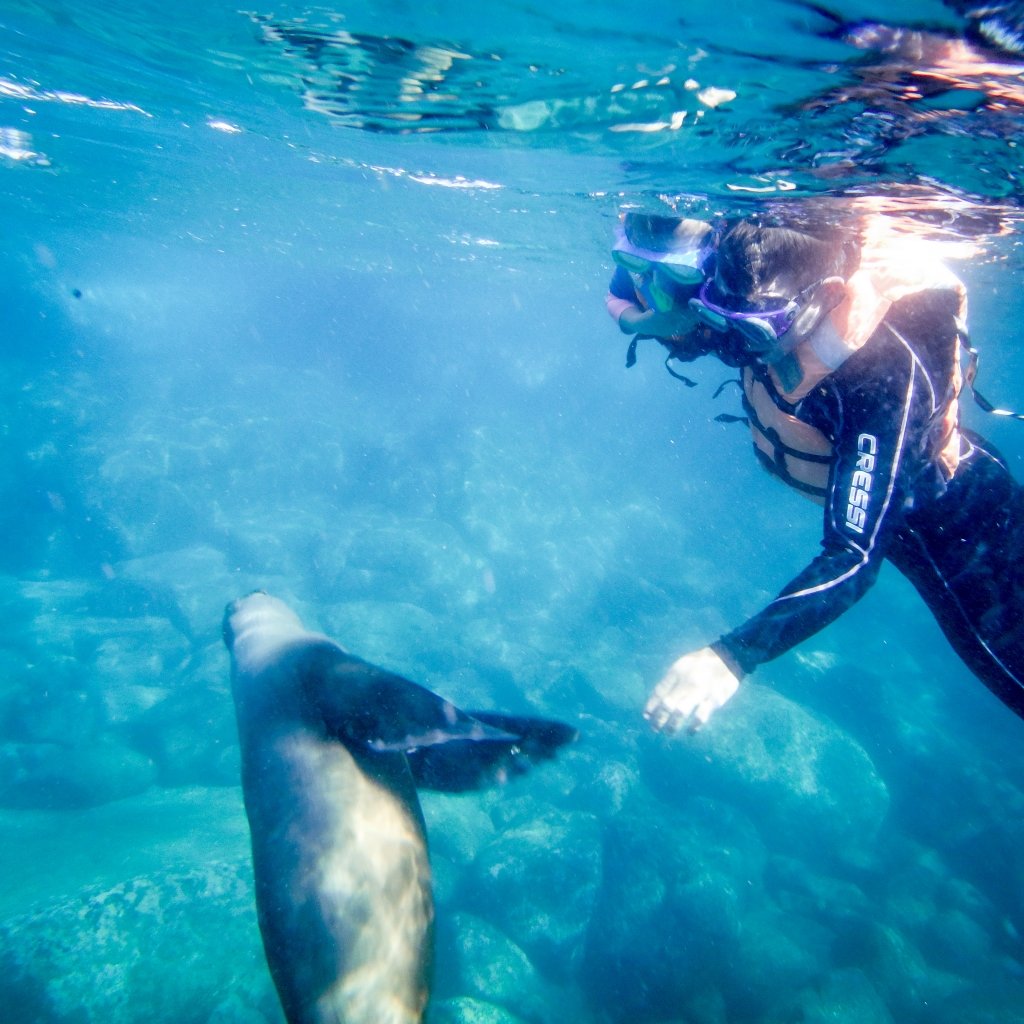 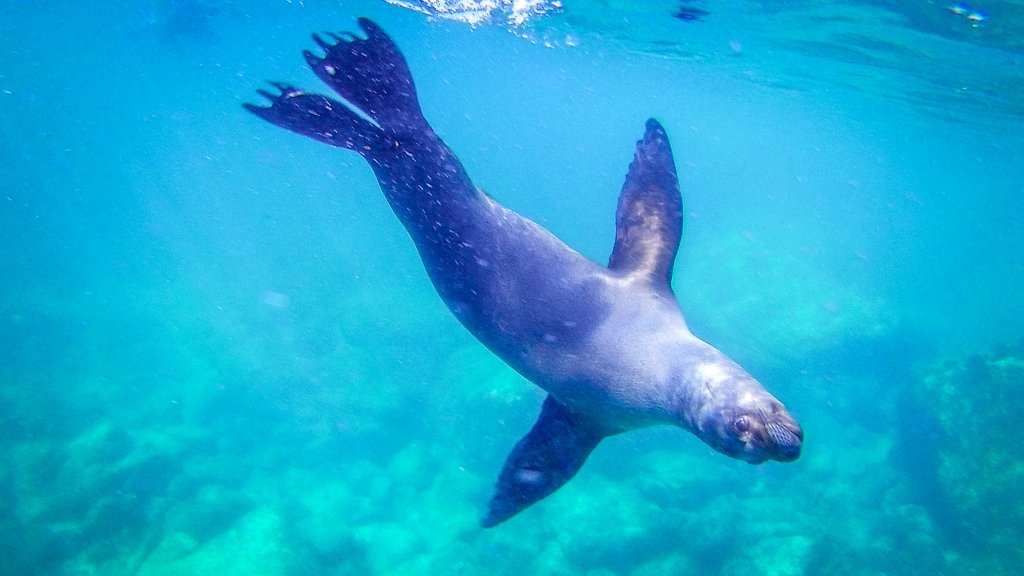 The girls loved it. After about 20 min in the water Ellia asked to return to the boat because she was cold. Her lips were visibly purple! She was trying so hard to stay in the water as long as she could, but at that point the shivers had taken over. We were very proud of how long she had toughed it out. Eben and her went back to the boat, while Arias, Aunty Nene, and I continued on.

And so happy we did! The next cove we swam into had an extremely playful pup that came right up to all of us, trying to nibble at cameras, fins, get pet, etc. At first Arias was shocked by it, by the fact that it kept rubbing up on her, but after a few interactions with the pup she was all about it, letting it approach her without any fear. As a parent, again, another moment of pride. 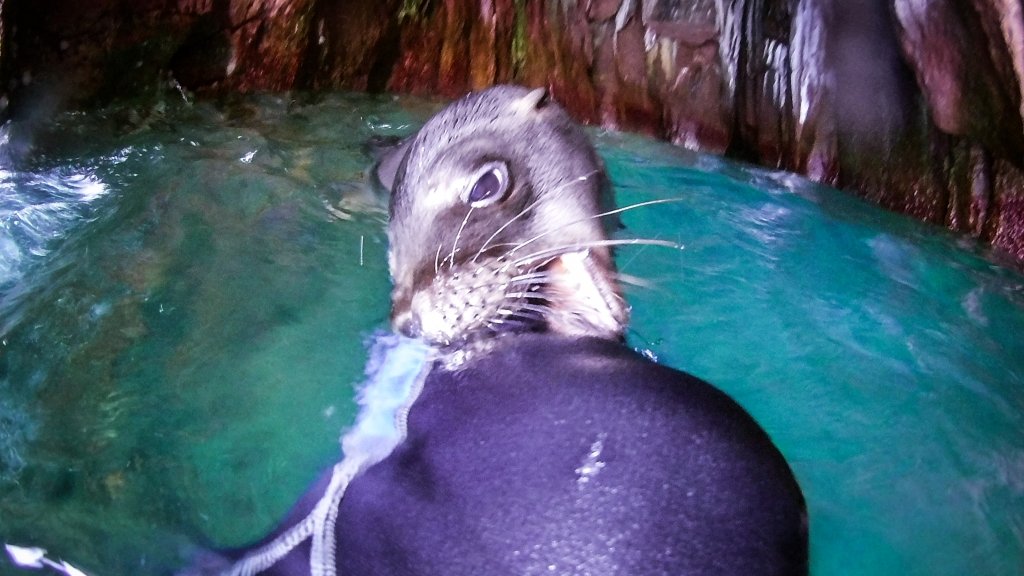 A Much Needed Warm-up and Lunch Break

After the sea lions we had a much needed stop on the beach to let the sun warm us all back up, and to fill our bellies with a yummy lunch. Then we were off to the whale sharks! 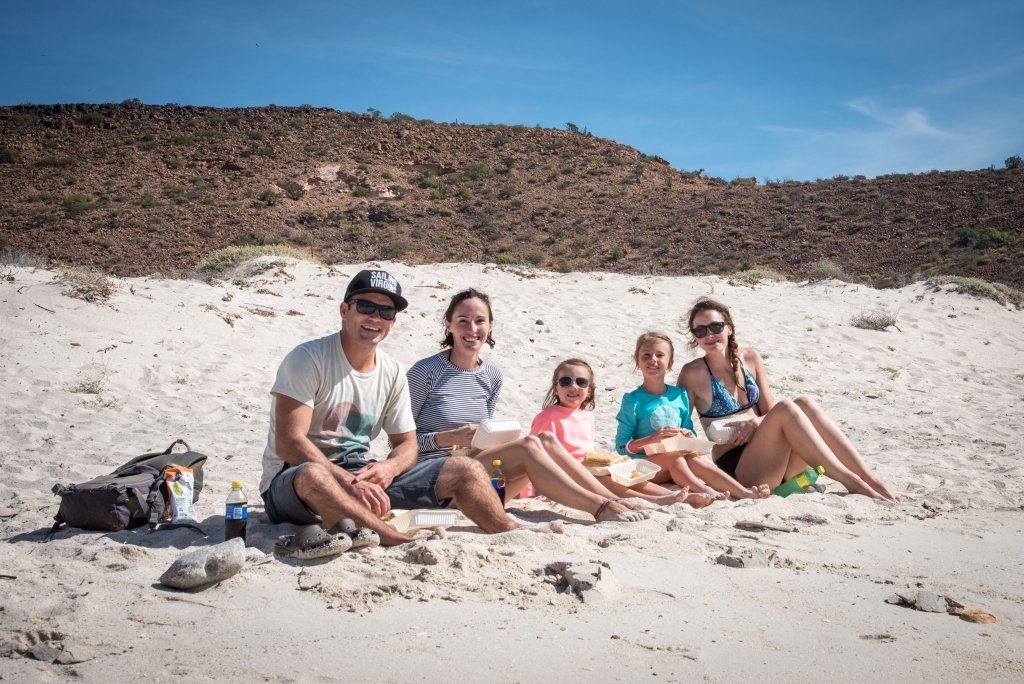 There have been some new rules put in place this year, to better protect the whale sharks. Only a certain amount of boats are permitted to go in their area at once. Boats cannot drive over a certain speed in the whale shark areas. Only a certain small number of people (5) are allowed in the water with them at once. People are only allowed to come within a certain distance of them, for everyone’s safety. And I am sure there are many more as well. We were extremely happy to see our captain, and the other boats around, respecting these rules and not overwhelming the whale sharks with tourists. And because these rules are being abided by, we got an extraordinary encounter. 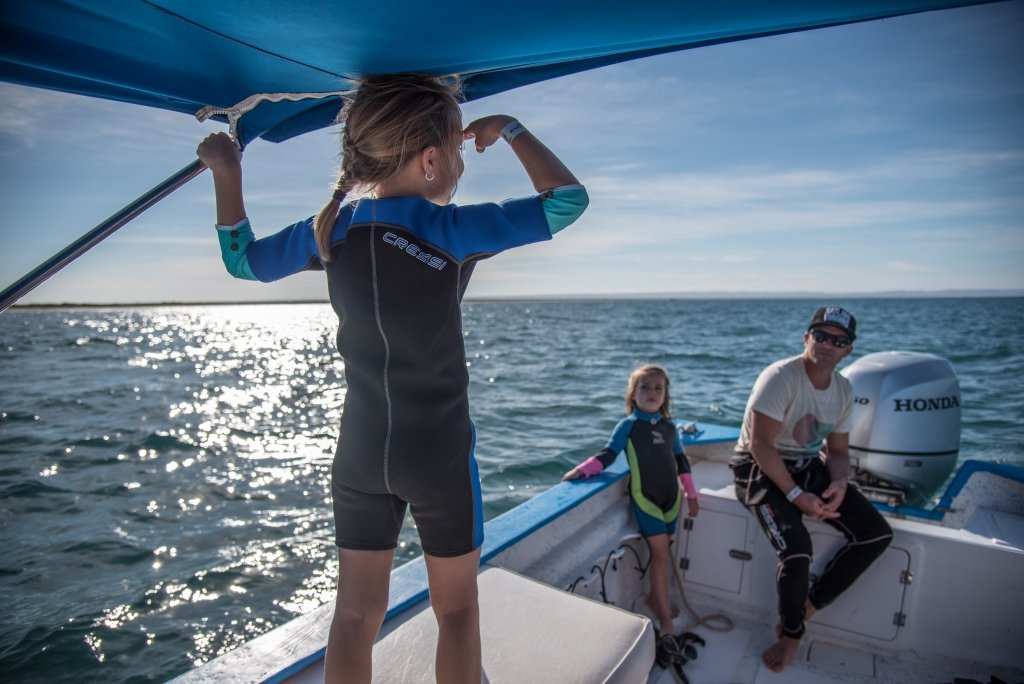 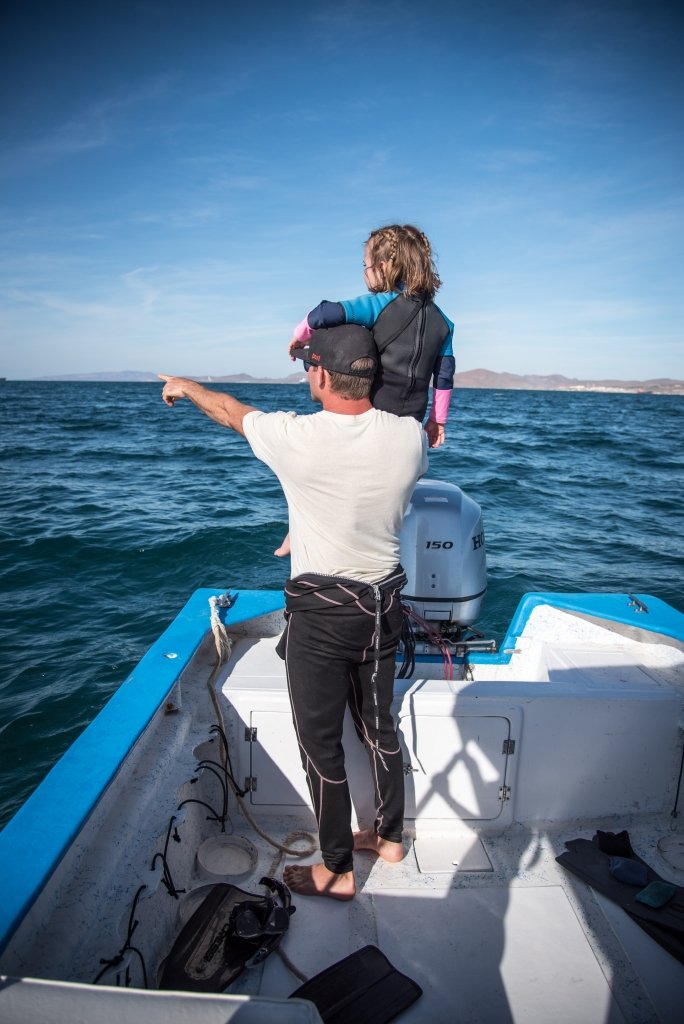 When we were given the ok for our boat to go to the whale shark, one came right to us. Literally only a few meters away from our boat, a whale shark repeatedly breached the water while it was feeding. It was not bothered by our boat’s presence, it kept on doing its thing. 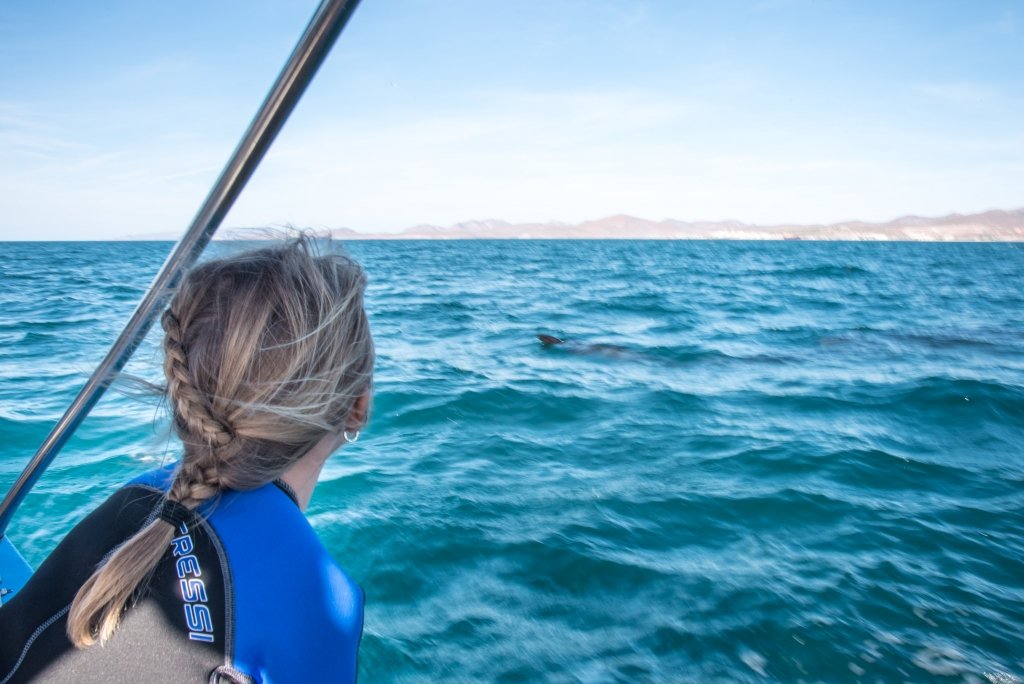 The other couple in the boat were already suited up, whereas we still had to get the girls back into their wetsuits (remember those small adjustments you have to make while travelling with kids, this is one of them…things go slower with kids!) so we told the other couple to go ahead of us and get in the water with the whale shark. Watching them get this slow, closeup encounter with the whale shark made us slightly jealous. This is exactly what we wanted for our girls, not to have to “swim” alongside a whale shark, because the girls’ little legs can only kick so fast, but to be able to just float with it, while it swam up and down feeding. WOW! Jealous. 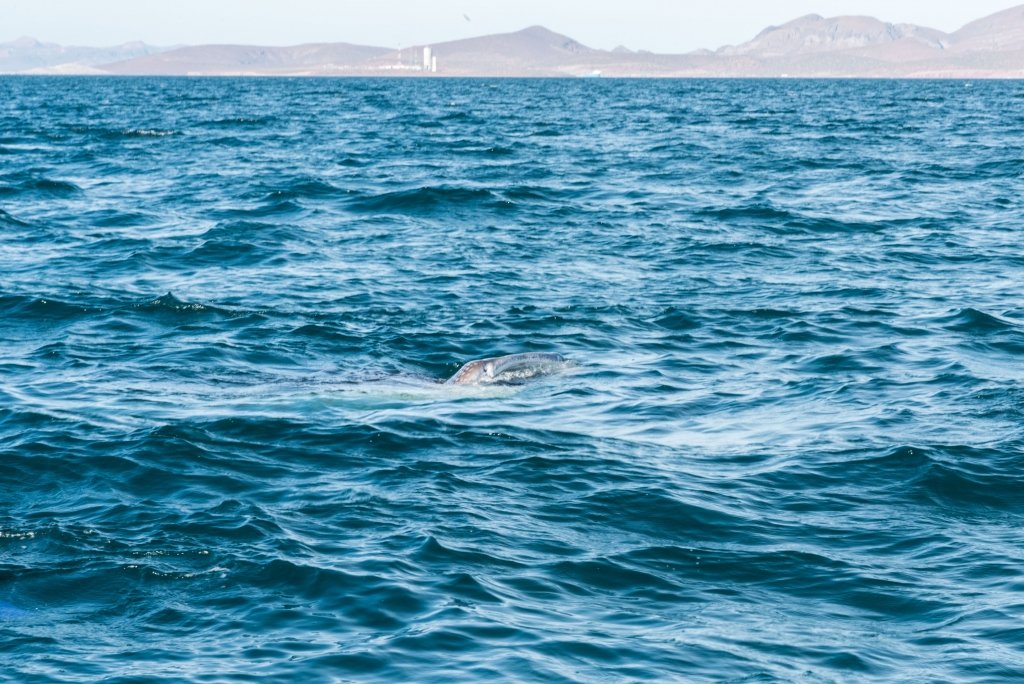 I guess our captain could see the envy in our eyes! He told us to be patient. That it would ok. And he was right.

Once the other couple was done in the water. We only had to wait a few minutes and that same whale shark returned for more feeding time. I guess we were in a good krill spot! We got into the water, as quietly as possible with two kids splashing around, and swam towards it. It was slow, docile, beautiful, and huge! 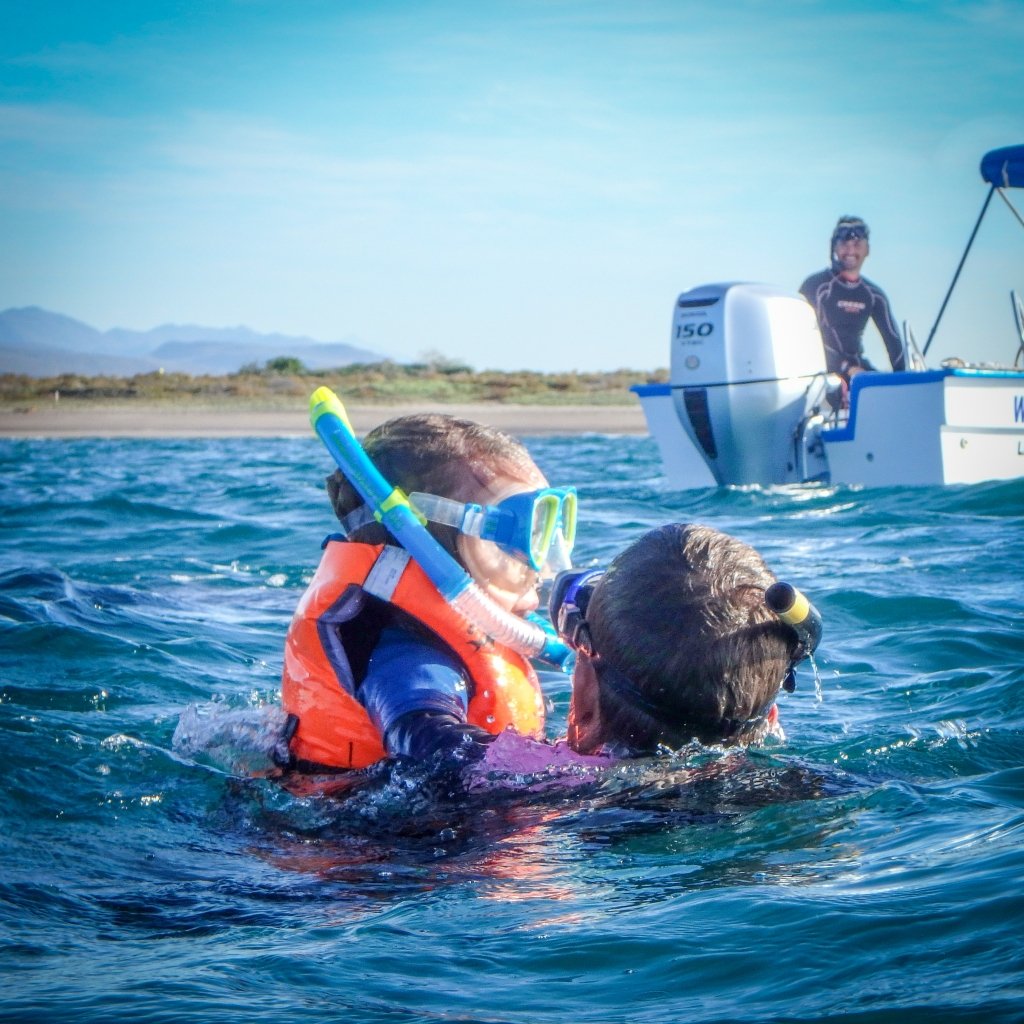 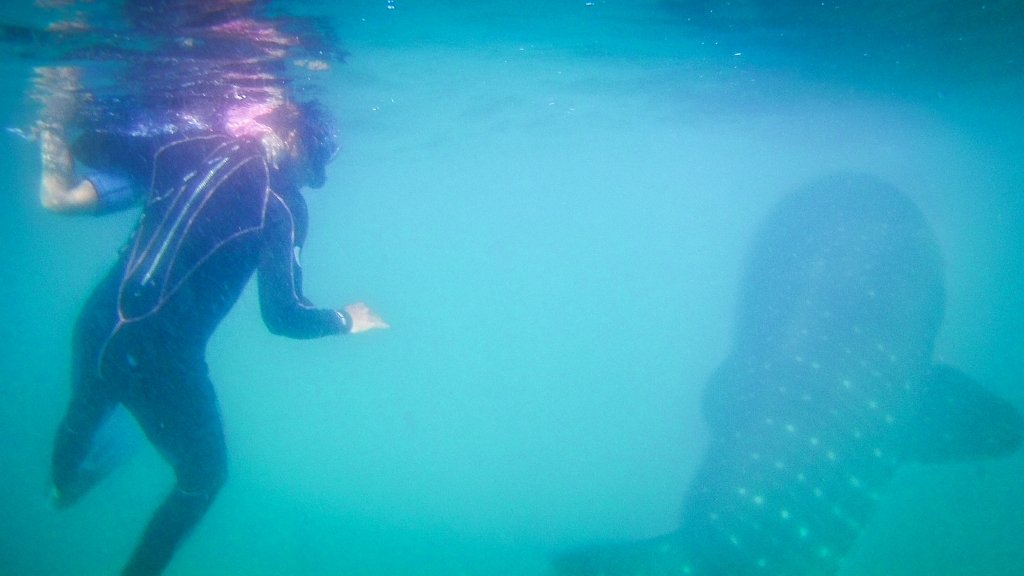 We really didn’t have to do much swimming at all, as the whale shark pretty much kept to the same spot, circling around and breaching for more food. Both our girls kept close to us, holding on to us for safety and support. And we even had a few moments of having to “back-peddle” away from the whale shark as it was getting to close to us! At one point I felt Arias’ body tense up next to me. She stuck her head out of the water and asked me “Mama why is it getting so close to us?!” The whale shark was gigantic compared to me, I can only imagine how Arias felt. 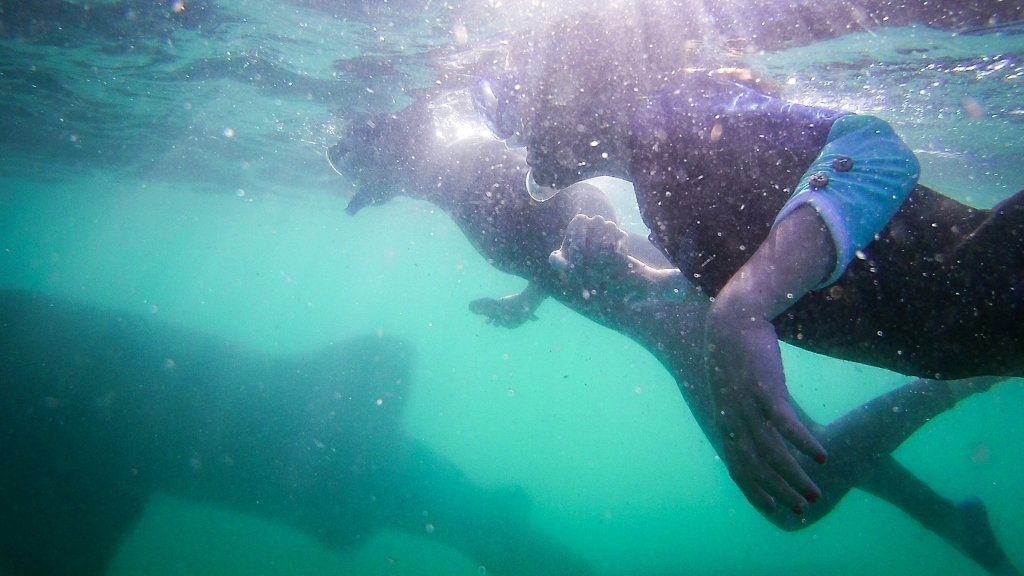 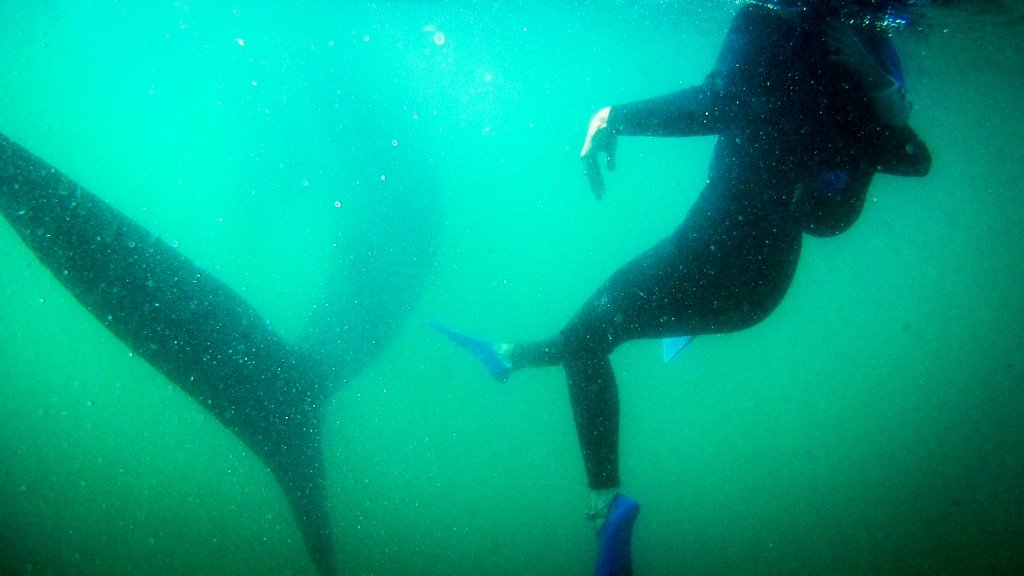 After a good amount of time in the water with the whale shark, both girls were ready to go back to the boat, so they tagged out and Eben and I kept swimming while they sat in the boat with the captain and Aunty Nene. It was nice to have some extra supervisors around to be able to do that. 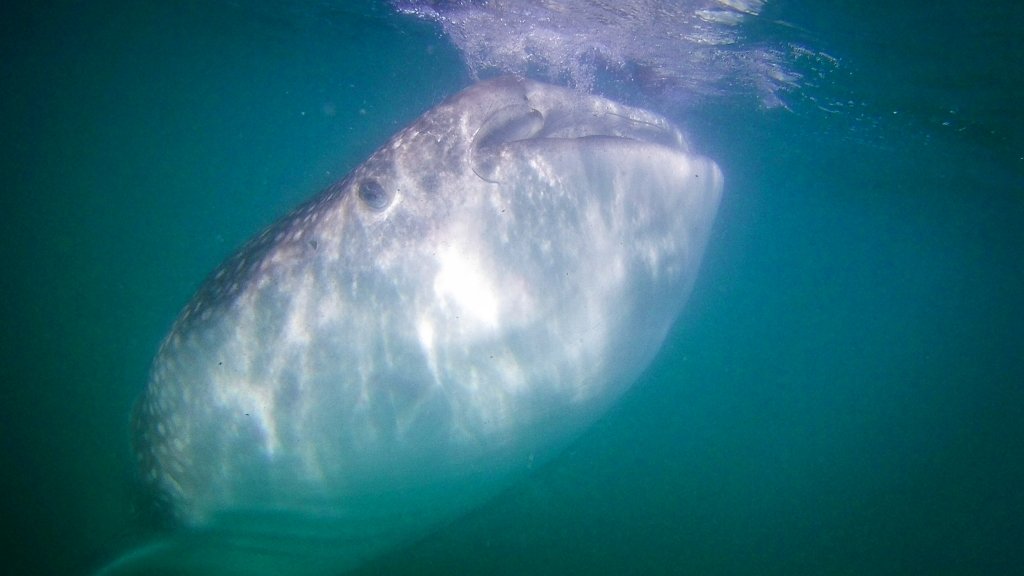 Thankful To Have Brought The Kids Along

Around the dinner table that night the girls recounted stories of their day. They spoke of how grateful they were. Of their favourite moments. They were still “high” from the experience. And our hearts were full.

Doing an excursion like this is cool. Doing it with kids amplified the whole adventure. The countdown was relentless, the excitement was supercharged, and the actual experience reminded us parents of so many things…to slow it down and go at kids pace. To realize that if I’m cold how does my 5-year-old feel? That if I am surprised at the size of the whale shark swimming next to me, how does my 4 ft tall daughter feel about it? And that if I am about to burst from being so excited, how are my children managing to contain themselves!?

Having done this was an amazing event, having done it with our girls left us beaming even more. 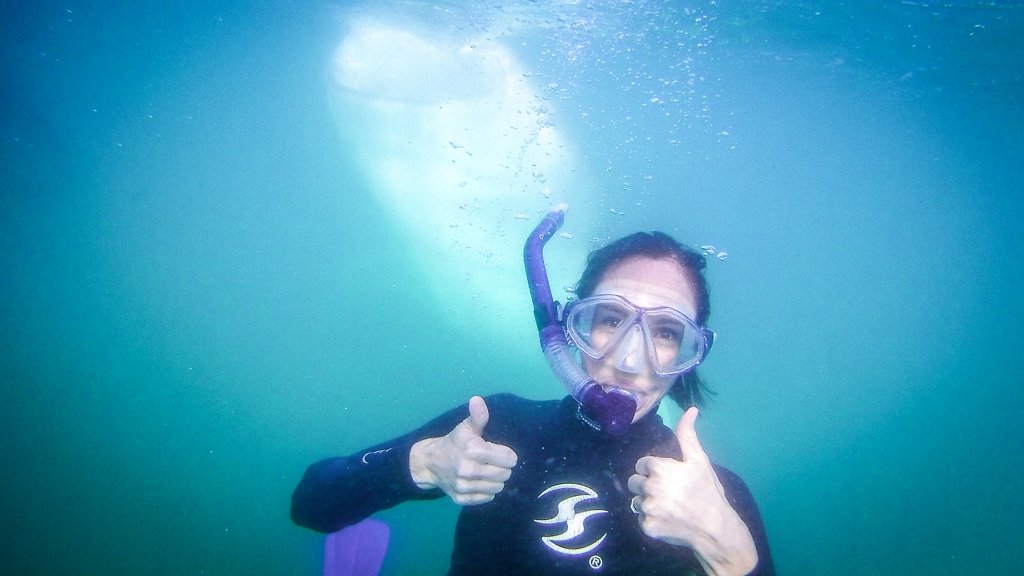