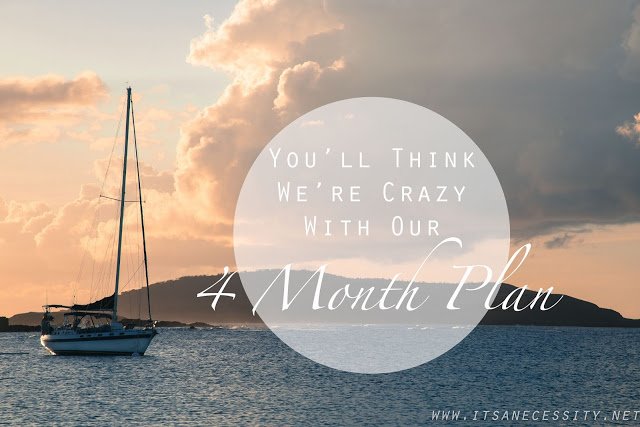 My wheels have been turning for the last month or so. Trying to figure out what it is “I” want, where I think we should go. It all started when I found myself standing in the middle of our salon doing the Ugly Cry. At that point Eben and I had a few big talks and I concluded that maybe I need/want a little more stability in our plans. We have always been all over the map, both metaphorically and physically. We think our lives are heading in one direction, and next thing we know we have done a complete 180 and doing something else that was totally unexpected. After the cry Eben gave me his ideas and input but pretty much left the ball in my court saying, “You need to figure out what will make you happy”. So my wheels have been turning. And they still are. But for now we have a 4 months plan.

Our plan has been made in very light brush strokes, because I know us well and it could all change if an interesting opportunity arises, but for now this is the direction we have chosen to go.

Mid November to Mid December:
-Eben will be flying to the Canary islands to join our friends Ryan and Tasha from Turf to Surf. They recently bought themselves a new shiny catamaran and want to bring it across the Atlantic in time to spend Christmas in the Caribbean. Eben has always wanted to cross an ocean, but I have no desire to, and our boat is not the best equipped for that type of trip. When they offered him this opportunity it seemed like the best time for him to cross this off of his bucket list, on someone else’s fully equipped brand spanking new boat. The trip should take him about 3 weeks, but we are estimating 4 just to be on the scheduling safe side.

-Genevieve and the girls. We will have our boat on our friends’ dock in St Thomas. This way we will be close to them, able to do all sorts of land excursions with Leigh Ann and “A”, keeping us happy and busy while Eben is away. In this time there has also been discussion of us moving in to our friends’ house with them, for the sake of camaraderie, as well as a possible trip or two (by ferry) to Tortola to visit with Windtraveler and Where the Coconuts Grow, who will be making Soper’s Hole their home base for the season. Being surrounded by friends, rather than sitting out on the water on our own, like we did when Eben was away in June, will hopefully make my solo time with the kids much easier.

Mid December to Mid February (?)
-Once Eben is back in the Caribbean from his crossing we will, as a family, head to the airport and fly out for Tanzania. (leaving Necesse on the dock in St Thomas) Last June Eben participated in the Adventurists’ Adventure 9 with our friend Ryan (same Ryan as above). It was the first time this race had ever been attempted and these guys and a few other teams, were voluntary guinea pigs to see if it was actually possible. They survived, barely, and Eben was invited back to help them run (as a paid employee) the upcoming race which start December 29th. I was slightly jealous last time Eben got to go to Tanzania, getting to discover a new country, without me, and without the kids. This time around we wanted to do it all together. The salary that Eben will make will cover the costs of our family’s airfare (flights are so expensive when you have to pay for kids’ seats too! If any of you have some good connections for reduced fares send them our way 😉 ). So in the end we will not have made any money on this job, but we will not have lost any either. And in exchange for no money gained or lost, we will get a trip to Tanzania. Although the race only lasts 2 weeks, we figured if we are going to fly all the way over there, and technically spend his whole salary on flights, we might as well spend an extra month or two adventuring and discovering this far away land.

There are only a few spots left on the next Adventure 9 race, so if you are crazy enough to want to give it a go, check out the video (with a lot of narration and pics of Eben), sign up, and come and meet us in Tanzania.

Mid February (?)
-Somewhere around this time, we will return to St Thomas, USVIs to our boat that will have been sitting there lonely and waiting for us. It will be prime sailing time. But we have no idea what we will do at this point. That is as far as our 4 month plan has made it. We could stay another season in the VIs, sailing this hollywood-ish area, or keep the boat stagnant and keep make money while Eben does more work. Or we could sail it back to the DR, or to Mexico. Or we could sell it and move to land, or the newest option Eben threw out there last night, sell it and buy a catamaran in need of love (the only way we could afford a cat!). The options abound, and my wheels are still turning, or getting bogged down with all the options. But it is exciting to see that we have the next little bit figured out, in light brush strokes.