Where We’re Choosing To Set Up Shop

Home/Where We’re Choosing To Set Up Shop
Previous Next

Where We’re Choosing To Set Up Shop 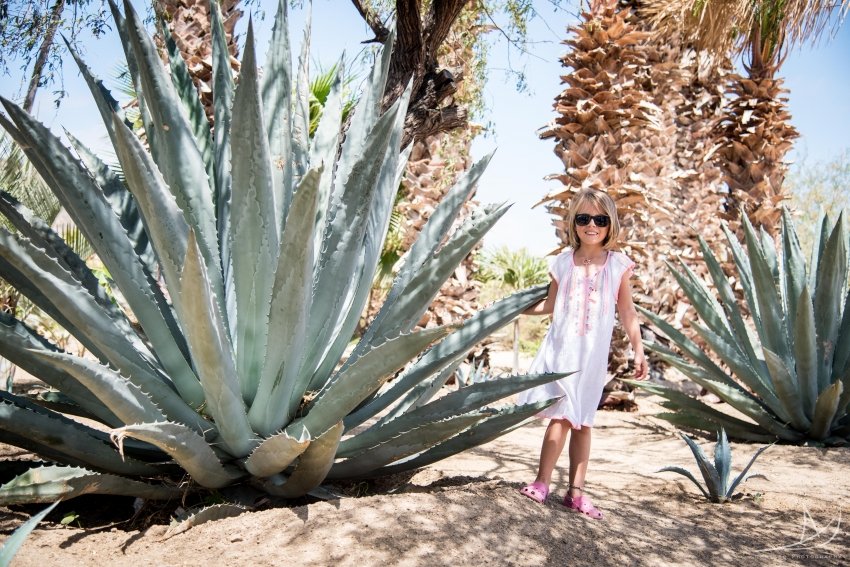 We left the boat and were homeless. Outside of a 28ft trailer in Canada (which is not winter-liveable) we had nowhere to go.

The trip to Mexico was in the hopes of finding our promised land. We had a lot of hope that we would find where we wanted to set-up a home base. A LOT of hope being that we were going to visit two locations that we had never to before.

The two spots we chose to check out were based on friends’ recommendations, with strong kiteboarding influences. They were on either coast. And they were completely opposite from each other. 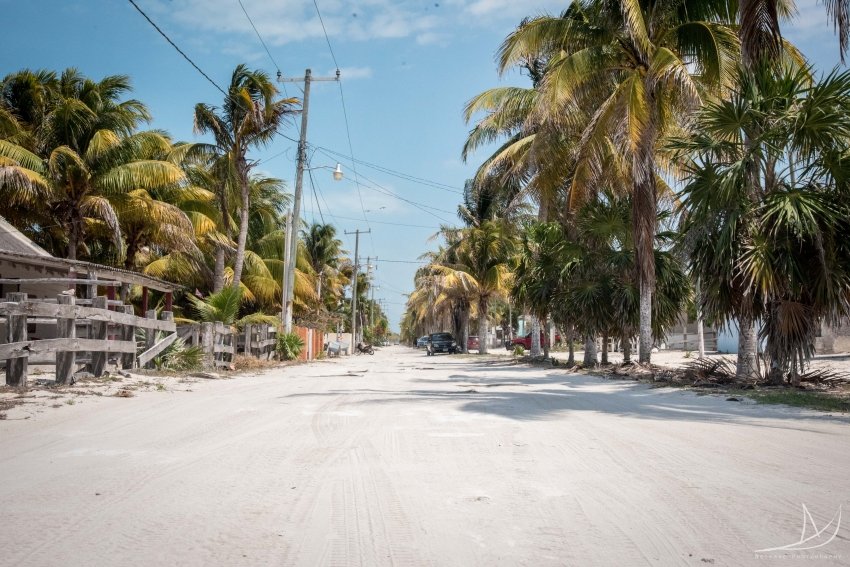 This small, very local-feeling town, is about two hours North of Cancun. Although that is not a straight drive as the coast is separated by a few reserves and national parks. The town itself has one main paved road, and every off-shoot is made of packed white sand.

There were only a handful of expats there, 2 of which we knew before arriving. The rest we got to know during our stay. The same thing brought us all to this spot, it is a great spot for kiteboarding, and it is an “emerging” town. Although it is well-known as a Mexican holiday town, foreign money is only starting to trickle in.

Our first day there the girls hated it! That was due to the longish drive, after having just gotten off the plane, a huge amount of stinky seaweed that had washed up on shore from a recent storm that caused the whole town to stink, and from our walk on the beach where the wind was causing us to get pelted with sand. Our first impression was “no way”. 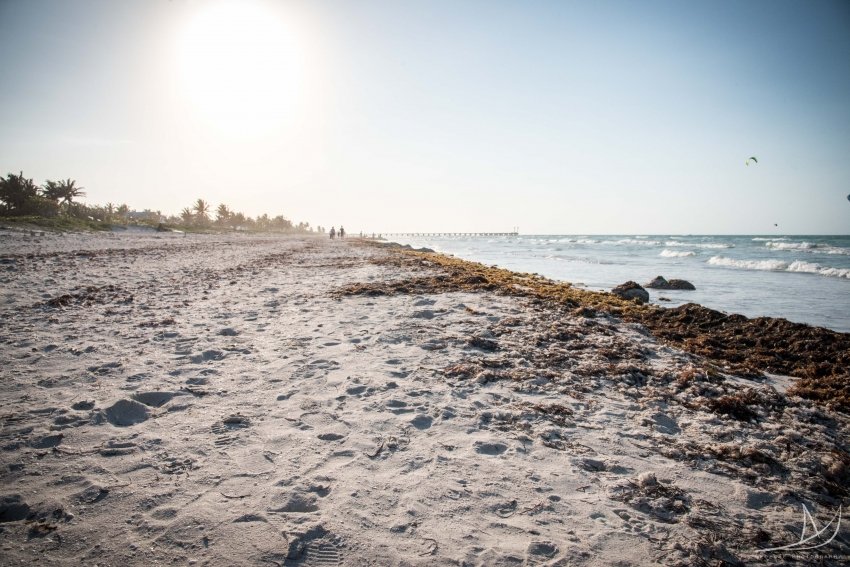 By day two we had rested up and looked at the town from a new perspective. We had made new friends, eaten at the local taco spot, gone kiteboarding, and started walking around the backroads of town to see what the real estate options were.

We liked what we were seeing. Lots bordering the jungle, only a few streets back from the beach were within our monetary means. We could picture ourselves living here. Kiteboarding in windy hours, working on building our home and a boutique hotel the rest of the day.

This tropical beach town could definitely be our next spot. 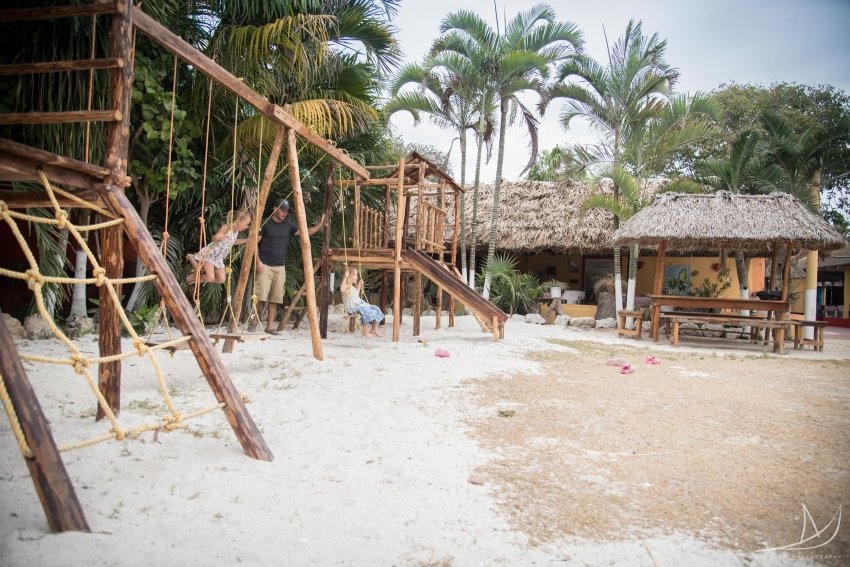 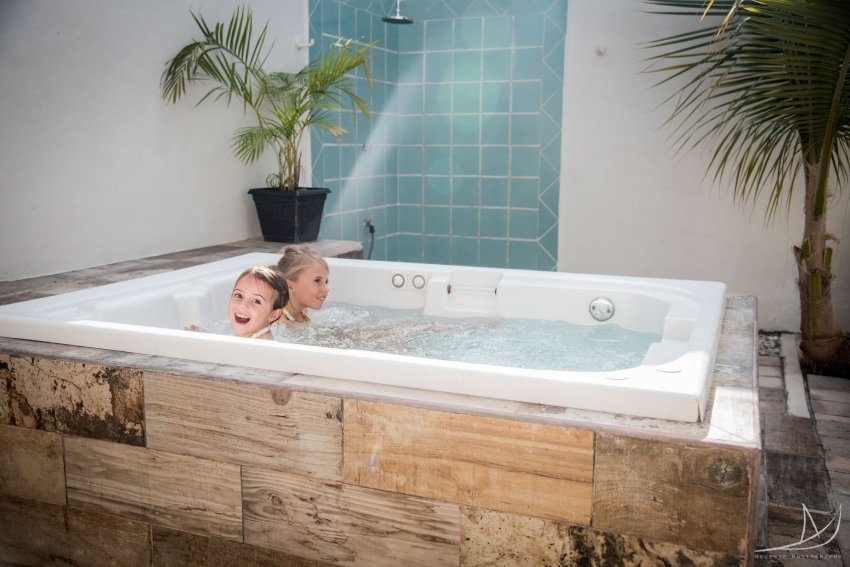 Because of really bad planning on my behalf I overlooked the fact that our time in El Cuyo fell at the same time as Semana Santa (Easter week in a Catholic country is a huge thing). We had planned on spending a week and a half in El Cuyo, but because of the holiday we could only find a hotel room for the first three nights, after that everything was fully booked and we found ourselves heading to Puerto Morelos for the remaining time.

It’s halfway between Playa del Carmen and Cancun which we flew out of. We found an airbnb in our budget. And it was extremely close the Cirque du Soleil show Joya, that we wanted to treat ourselves to.

Because our minds were already in real-estate mode, we were keen on seeing what this town had to offer as well. We found that we could easily live here in a small condo. It would not be an ideal spot to start the type of business we are keen on, but if we changed “our plan” which we do regularly, we could simply buy here and live. 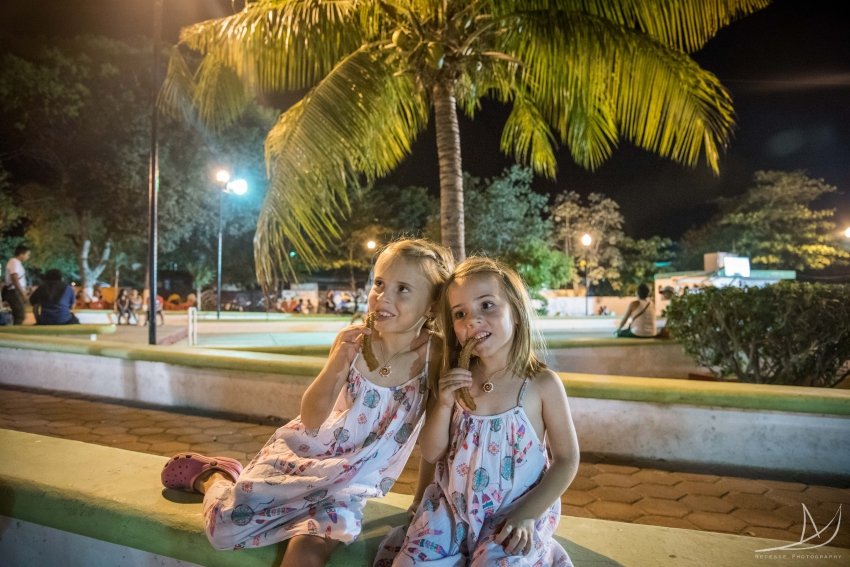 We spent our time in Puerto Morelos relaxing. Slowing down the pace was extremely needed. We were still living with the emotions of selling our boat, of being homeless, and being in a completely new country hoping to find a home. We spent our mornings in our airbnb, the afternoons walking around the waterfront and peeking into all the shops, and our evenings vegging with a movie.

The Cirque du Soleil show was a definite highlight of this part of our trip. The performances, the costumes, the interactions, the whole experience was a blast. The girls were both clapping, giving standing ovations, and yelling out “THIS IS AWESOME” throughout the entire show! 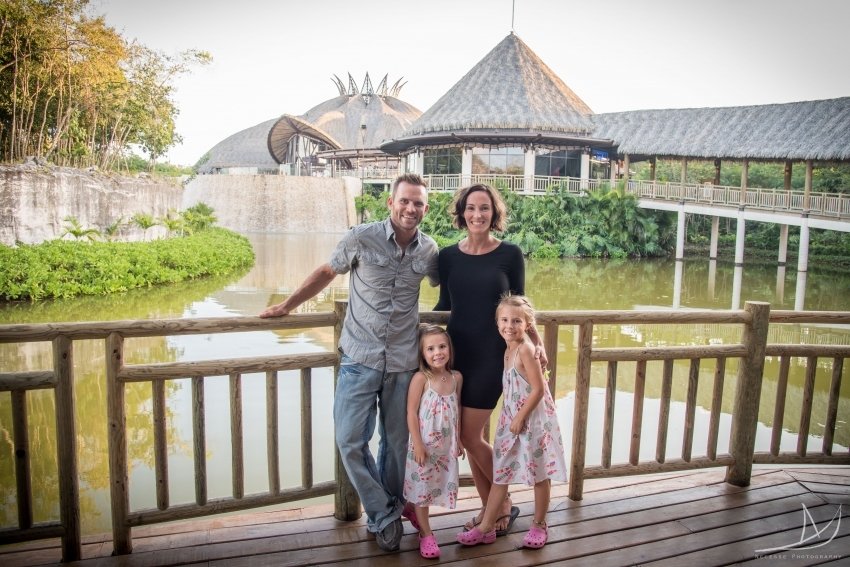 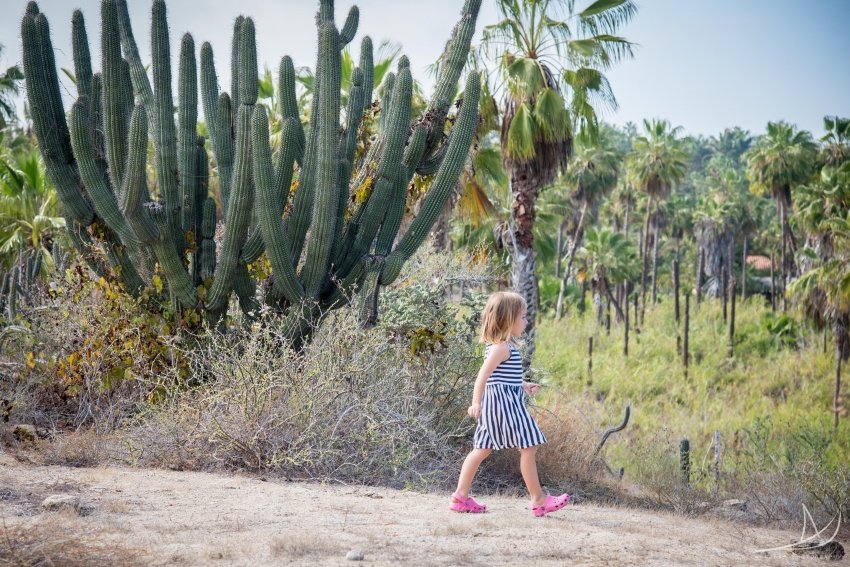 We hopped on our flight in Cancun and flew from the East coast to the Peninsula on the West Coast. We flew from tropical to desert (which we weren’t really expecting).

This was my first time being in this type of desert. It is dusty, there are huge rolling mountains, and there are cacti everywhere. I kept expecting to see tumbleweeds to blow by and to see a Mexican ranchero riding horseback around every corner. Unfortunately that never happened!

There are no reefs to break the waves, instead they break on the beach, causing for huge water fireworks to explode right at our feet. The water is cold and scary. It is not what we have become used to, and it is not something I would let our girls play in unsupervised. 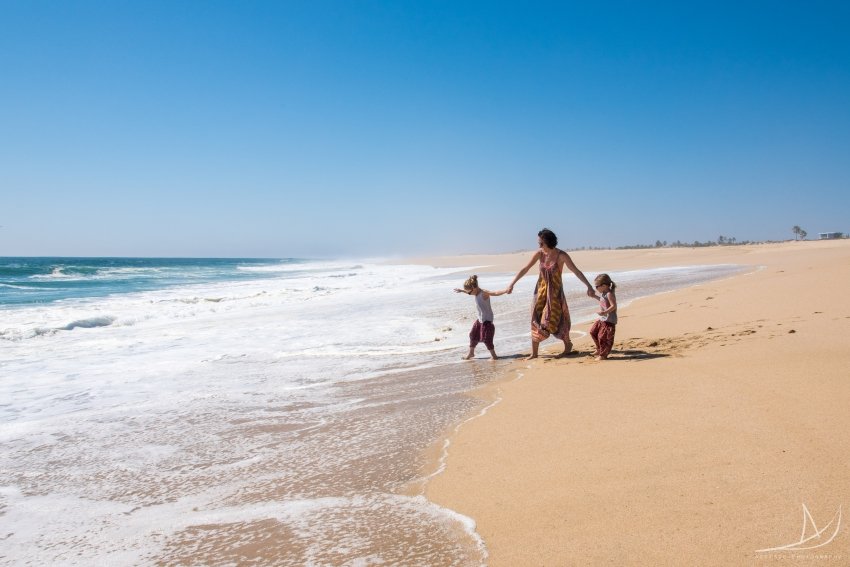 During one day on the beach we watched a teenager get sucked out by the rip tide, luckily for him a surfer also spotted him and went to his rescue.

Different Could Be Good

We have friends in this town that we knew from our days of living in the Dominican Republic. They were the ones that gave us the invite to come visit. They had recently bought a chunk of land and were keen on chatting about a partnership with us.

The town already have tourists going that way. Many bus in from Los Cabos and come to see the many shops, eat at any one of the 70 registered restaurants, and get a picture in front of the Hotel California (not the real thing, the song isn’t even about an actual hotel, but hey, this hotel is making bank!).

Todos Santos was recently selected by the government to be one of its Pueblo Magico (magic town). This means that tourism money will be funnelling into the town, to beautify it. The main roads have just been repaved due to this and more beautifications are in the works. 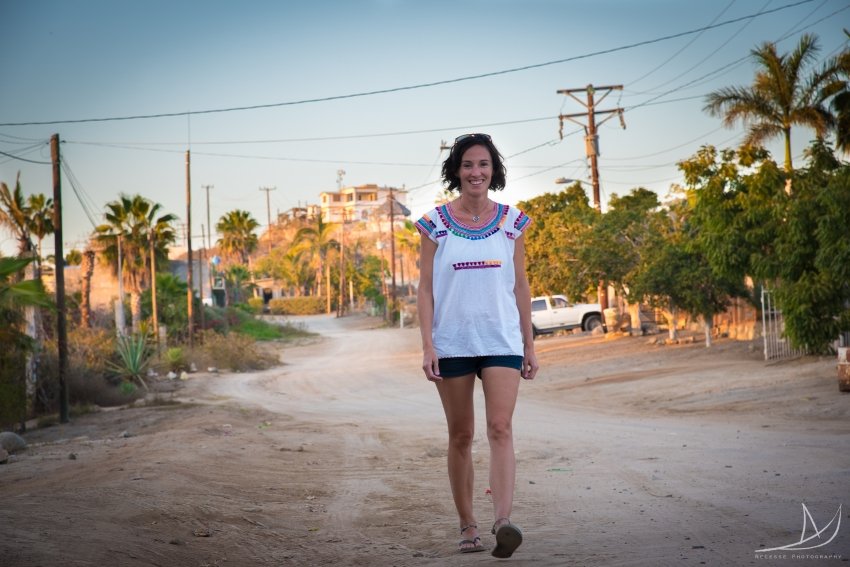 There is also a huge farm-to-table movement happening in this part of Mexico, attracting foodies and booze-connoisseurs alike. Every food stand seems to be “organic”. The town just has this healthy appeal.

Although we never pictured ourselves living in a dessert town, there is an attraction to it. It is completely different, which is intriguing. There is tourism already going there (good for business). I visited the local schools and liked what I saw. And there are plenty of things to visit and see. 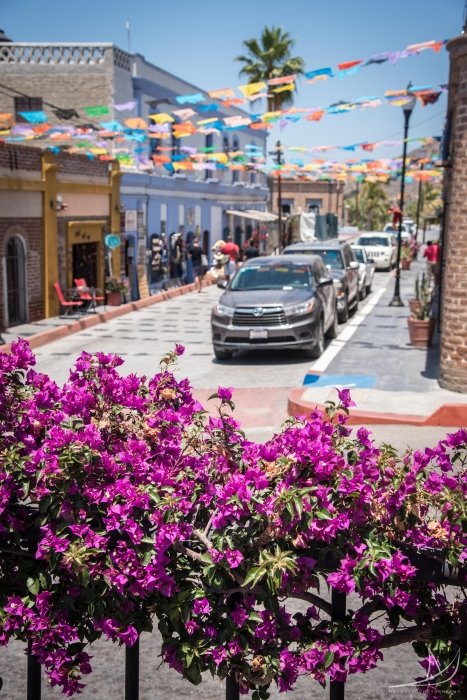 In our two weeks there we had a great time hanging out with our friends, who are now also our business partners. We hashed out business ideas, they showed us around town, they introduced us to their friends. We felt at home.

To make sure we could keep the “business” ball rolling while we are on this Europe adventure, Eben met with an accountant, and some lawyers, signed some paperwork, and the creation of our Mexican business is in the works.

Although a lot of the details are still being hashed out, we will soon be the co-owners of a couple plots of land in a huerta (a palm orchard), and will be building 2-3 high-end rental units. We are hoping to have these units up and running within the year, and this seems very feasible. 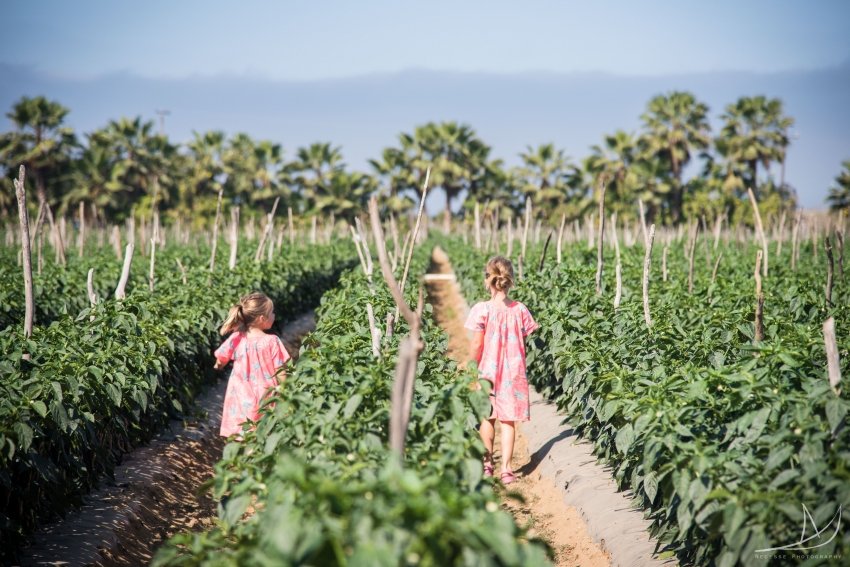 I have already enrolled the girls into local schools, taught completely in Spanish (LOVE THAT!). I will continue to homeschool them in english and math in the evenings. But those half-days in school will force them to become bilingual, and will introduce them to a new culture and the change to make new friends.

We are waiting until we get back there, sometime around August, to either look for a place to rent or a trailer to live in. The smarter move is for us to invest our time and money into this business first, and later work on building our home.

El Cuyo is not forgotten though. We just figured that if we started a business there, we would try more to DIY. Whereas in Todos Santos we will hire out the work and have it happen faster. (Again, smarter business-wise) So El Cuyo would take a long time to come to fruition. But even though a business there may not be the smartest option, we are still toying with the idea of buying a lot of land there, and either building on it in the future, or if that desire fizzles out we can always re-sell it at a later date. 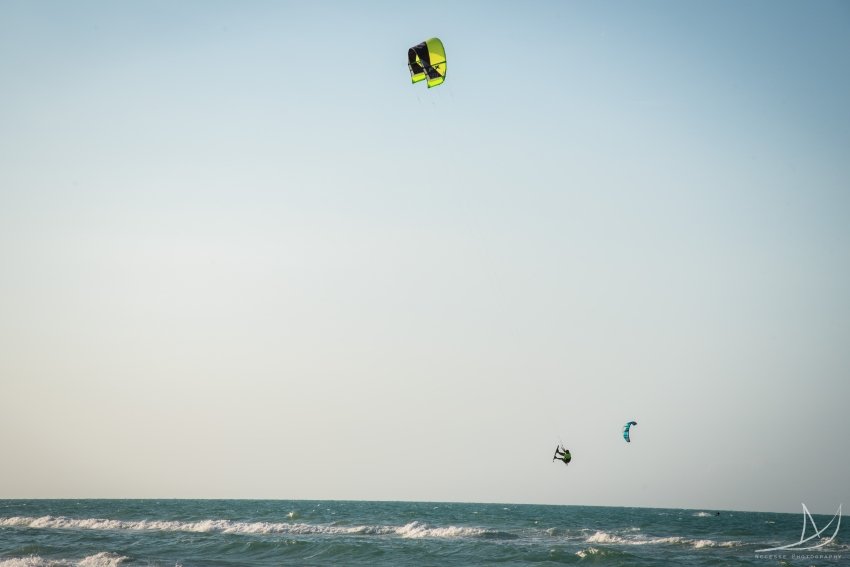 What does this mean for the next few months?

Before heading back to Todos Santos, Mexico, to start this new and exciting phase of our lives, we have a lot going on.

I am typing this while sitting on a train, commuting from Munich to Passau. Tomorrow we will embark on a boat to do a river+bike tour with Tripsite for 9 days. Then our family will visit Barcelona for a week, and London for the next.

After Europe we will head back to our property in Golden and keep moving on that project. This move to Mexico does not mean we’re stopping the Canadian house plan. We will continue to work on it. Bit by bit, every summer. Because Mexico is apparently too hot to live in (June-Sept).

We’re thinking we will have a solid month to work on the build. Sometime around mid-July Eben may head back to the USVI for a month to do some boat work for some friends. Then we will each fly from our respective spots and meet in Mexico!!! 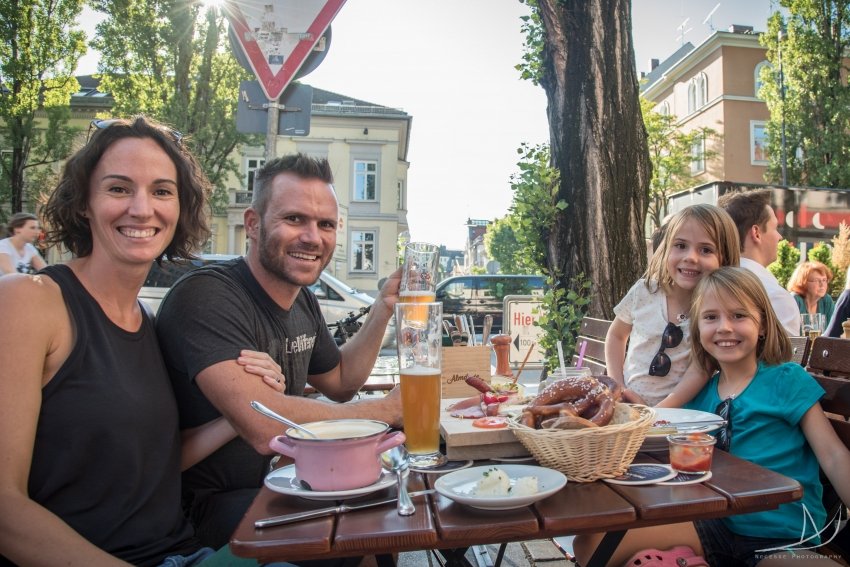