Home/We Got Ciguatera
Previous Next 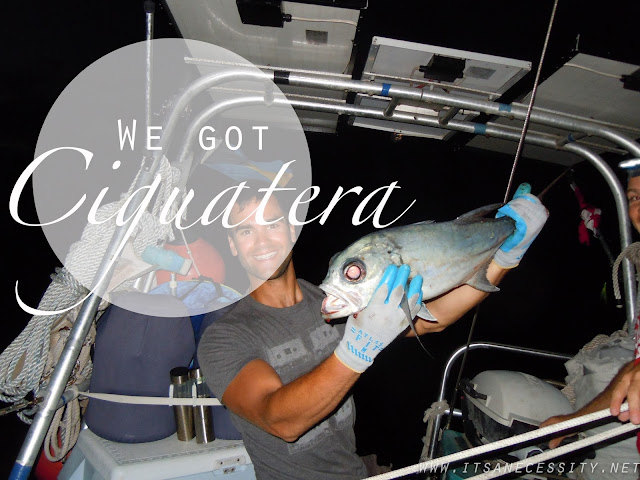 During our peacefully calm night crossing from Vieques to Culebra we were trolling two fishing lines behind the boat, in the hopes to catch ourselves a yummy, free, meal and also to make Edric and Kristin’s trip excellent by adding “ocean fishing” to their sailing experience. As dawn broke we felt the line vibrate and the next hour was spent reeling in the catch as we bobbed along our course. When it got to the boat we were surprised at its smallish size considering the fight it gave, and couldn’t quite identify the type of fish it was. It looked like the shape of a small mahi with the colors of a tuna. Once we arrived in Vieques and were all settled in, Eben went online and spent about an hour trying to identify this mystery fish, but no luck.

Our guest prepared the fish for us for supper. The meat resembled chicken in texture, quite thick and heavy, nothing like we had ever eaten before. The evening went on as usual. Girls went to bed, we hung out, played some games, and headed to bed ourselves. That is when the, what seemed like, timed-released poison set in. When we got to bed Ellia woke up complaining of sore legs. I spent the next half hour rubbing her legs thinking maybe she was experiencing growing pains. But not long after Arias coughed, in her “I am going to throw up” type of cough, so Eben whipped her out of bed and stood her in front of the toilet just in time. We got her back to bed and then she started complaining that her legs were sore. That’s when Eben started feeling queazy, went out into the salon, only to find both of our guests up and not feeling well either. Then my legs started aching as well. Instantly we assumed it was the fish, and thought, food poisoning. The rest of the night was spent with 4 adults and 2 kids all getting sick on a boat with only two toilets to use. The boat looked like one that was being attacked by an evil poison. There were people sleeping outside, throwing up over board, every bed was covered in towels in case of spontaneous erruptions, and every bowl, bucket, and pot was being used as a vomit receptacle. Other than everyone exploding from both ends, we were experiencing some other very strange symptoms, such as sore joints, muscle spasms, tingling sensations, mixed up temperature sensations, confused taste buds, sore gums and teeth, headaches, and slight hallucinations.

All of the above made for a horrible sleepless night for everyone, except Arias. Thankfully after her first bought of sickness she seemed to have gotten it out of her system and slept the rest of the night, while everyone else writhed in pain. At about 10am, Eben managed to muster up a tiny bit of energy and went into to town with a picture of the fish, for a second attempt at trying to identify that deathly thing. Looking back on the situation it was ridiculously stupid of us to eat it without knowing what it was, but considering it was a smaller fish, and not a reef fish, we thought we were ok. Eben found a couple of locals that recognized the culprit, it is what they call a Jurel, also known as a Big Eyed Jack. They told him that normally around other islands that fish would be no problem to eat, but since it was caught off the coast of Vieques none of them would eat it. They blame the waters around Vieques to be contaminated, and intoxicating all the fish with ciguatera, due to the Navy’s use of the area, with its plethora of ordinances in the water. Even if the fish identifying guides say that Jack is ok to eat, all the locals say it’s a BIG no-no. They immediately told Eben to go gather us up and bring us to the hospital, mostly for the baby’s sake, as they feared dehydration from all of our relentless sickness.

The staff at the Culebra hospital were great at helping us out. Both Ellia, and our guest Edric, were hooked up to IVs to pump some fluids back into them and give them some meds to stop the hourly evacuation of “you know what”. They also informed us that they were certain that ciguatera was the toxin that we ingested from the fish, and all the symptoms affiliated to it. And they were spot on, at least one of us had experienced every side effect they were saying. The doctor also told us that locals won’t eat 90% of the fish caught off the coast of Vieques, good to know. Wish someone would’ve told us that a day sooner and saved us this nightmare. Another nightmare we were not looking forward to was the hospital bill, being that this is a US territory and we are uninsured. But to our amazement, and a wonderful receptionist at the hospital, the bill for two ambulance rides (yes they picked us up and dropped us off) as well as the meds, and the doctor’s visit, came to a total of $20US.  insert “sigh of relief”.

Since the intoxication, we have done a lot of research on ciguatera as we were obviously not fully informed. We thought it occurred mostly in reef fish and that it is a cumulative poison that once you have reached a certain level you get sick. But this is not entirely true. It can occur in reef fish, fin fish, and shell fish as well. The fin fish that may be affected are the ones that may have come in contact with artificial reefs, otherwise known as human junk that has been left in the water, and the shellfish one is actually referred to as Neurotoxic Shellfish Poisoning (NSP) rather than ciguatera but has many similar symptoms. And one fish may have enough toxin in it to make you sick the first time you ever come in contact with ciguatera, such as our guests who had never eaten ocean fresh fish before. To our horror its symptoms can last days, weeks, months, and in some extreme cases, years after the poisoning. To help not have a relapse they recommend staying away from all fish, chicken, pork, caffeine, alcohol, exercise, and anything that could dehydrate you. They say that many other, non-fish, foods can retriguer the original symptoms, minus the vomiting and diarrhea. From what we got of it, good luck living and eating without the possibility of feeling this crappy at some point again. As we are still living our day to day with the sucky aftermath of eating that fish, we worry what type of effects it will have on our baby, who at only 19months got ciguatera. Who knows what the havoc that was reaped on her mini body could mean for her in the long run.

The following few days after consuming that evil, evil fish have been a very slow road to recovery and still getting caught off guard by the strange symptoms that are persisting. These include all drinking fluids having the feeling of being carbonated, the hot/cold senses being confused, the sore joints and muscles, the all over itchy skin, and the constant headaches. We are all pretty lethargic as we are slowly getting food and energy back into our systems. And the boat still looks like there was a crew of sickies on it, but we are managing to clean it up one tiny piece at a time. I do feel horrible for the poor man that took our two bags of dirty clothes, sheets, and towels; he is getting to relive our ciguatera in a whole other way.

With enough energy in our systems to regain a sense of humour we know half laugh, and half complain, about how crazy we must look. With Eben constantly swinging his arms around to try and ease the pins and needles, Ellia walking around playing with her numb lips and tongue, me scratching my imaginary itches all over and repeatedly squeezing my hands to make them feel somewhat normal, and Arias just being Arias, we look like we are all certifiable. I don’t know how much longer of this we can take, so if the next time we meet we seem a little off, the ciguatera might have made us itch ourselves to madness.

Here is an interesting link that we found some good info on ciguatera, (also info on shellfish intoxication), as well as fish to avoid, and how some reef fish are becoming affected because of artificial reefs. www.ncbi.nlm.nih.gov/pmc/articles/PMC2579736/