When You’re Really All Alone

When You’re Really All Alone 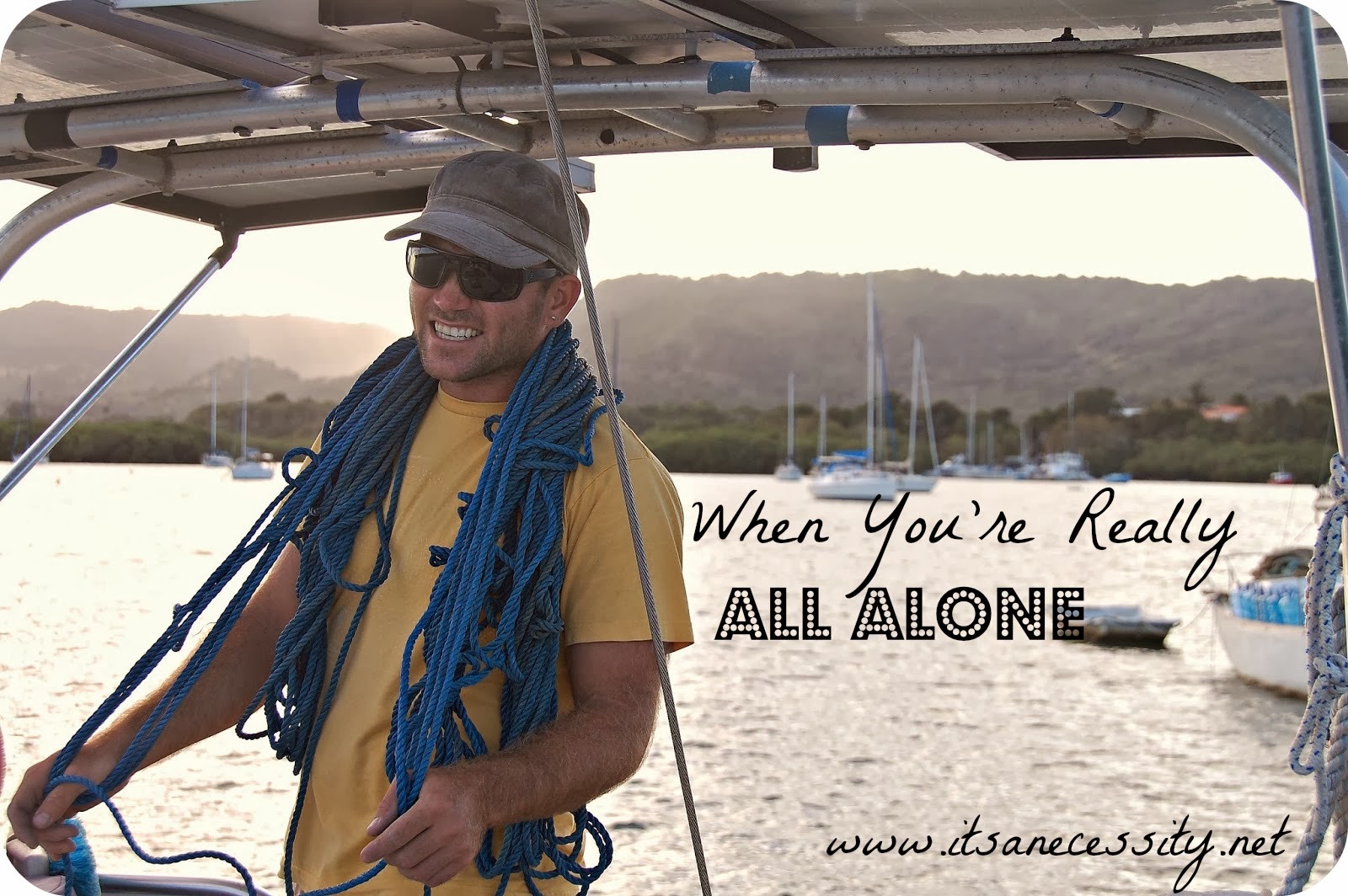 There is a reality that sets in when you and your family live on a sailboat and chose to cross vast bodies of water and you encounter a situation in which you would normally call a friend, a professional or even a super hero.  Sometimes… You are in fact all alone out there. It doesn’t happen very often and when it does you pray that all the stars align and no abnormal decisions need to be made. But this last crossing from Puerto Rico to northern Dominican Republic decided to test or abilities as superhero decision makers. Allow me to explain.

We have become some what of night owl sailors. In fact every sail we have done in the last few months has started around midnight or earlier. The choice is partially due to mr. Bruce Van sant and his recommendations on the night lees but moreover it has been directly correlated with having 3 women onboard, 2 of which are under the age of 4. Spending any amount of time in disgruntled waters is trying on even the strongest of us but then asking an infant to hunker down for, in this case, 2 full days and 2 nights can seem abusive at times. So what we came to realize is this: Most short island hops can be done in 8-12 hours, the girls inevitably wake up around 6:30 when under sail and seem to be unaffected by the ocean when asleep, Genevieve performs best when rested, and I stress less when I know no one is paying attention and really has no idea what is going on. So by the time the sun is coming up and the girls are waking, there is only a small number of hours before next landfall. Seems ideal right! 9 times out of ten this is true. Let me tell you about the other time.

We left Boqueron, Puerto Rico at 6:00pm knowing full well that by the time we even started to feel the ocean the girls would be fast asleep, we would be feeling the groove of the sail, and Genevieve would be dozing off soon after. We plan all our trips with an end destination in mind but usually have one or more short stops plotted in the GPS if the sail proves to be overly taxing. In this case we knew we were avoiding Mona island so the closest short stop was Samana Dominican Republic. So the first short stop option would be approximately, 20ish hours from departure. It was a rather nice sail across the Mona making good speed and once the girls awoke everyone was in good spirits. Then Ellia threw up, Genevieve felt a little woozy (totally abnormal for her and I believe directly associated with the ‘idea’ of the dreaded Mona passage) and they both went right back to sleep. Arias kept me company for an hour or more and then stated “your right papa!, that medicine (1st time using kid’s dramamine) really does make you sleepy, can I go back to bed?”. And there I was relaxed again as everyone slept. Nothing crazy happened for the rest of the day but the winds did die down and we did a fair bit of motor weebble wobbling. I had 2, 1-3hr naps and as we approached Samana we questioned a stop to regroup either in Samana which would add more than 10hrs to the overall trip, or in Escondido which is not said to be the best anchorage if there is any north in the wave direction. Genevieve is always far too supportive and will push on but she felt beat by the motion and even stated out loud that she was ready for the closest rest from the waves. All she wanted was to be safe and finished in Luperon, but the thought of another 28hrs of the way she was feeling was far too daunting. We decided that the best bet would be a rest in Escondido but we would be arriving as the night fell and that is never very exciting. As we got closer and closer the 3 lady troopers got more and more tired and we soon realized that they would all be asleep again for the next 10 or more hours so why not just push on.

That’s when it happened. I decided I would be a nice captain,husband and father and go off course 4-5miles to hide in the shadow of the northeast tip of the DR which would give us 45ish miles of lessened waves and the equivalent of 8 or more hours of unadulterated sleep for my women. As I veered to port 40 degrees, it all started to settle down and I was so excited that I leaned over and touched Genevieve’s face to gently wake her and tell her to sleep deep because I came into calm waters for her. I was hoping for brownie points knowing that just telling her that would allow her to relax a bit and rest.  There have been numerous times where I have woke her abruptly in need of help in a spiraling situation that is blowing out of my comfort and maybe even out of my control. I wanted this one to be the time she remembered being woken for those gentle words of hope and love. And they were!

At 1am… They were not! I think the angels of the sea whispered to me that now was a good time to try letting out the jib again and it would also be a good idea to check its shape with my headlamp on. Immediately after I set the jib, I randomly looked to starboard and saw what looked like the glimmer of a crab pot buoy in the water. I checked my depth, 189ft, thought to myself “kinda deep for a crab pot in DR”, and looked again. In that exact moment, the buoy sprouted a jet engine and went wizzing in a u shape around to the back of the boat. In a second I flew across the cockpit and threw the engine in neutral. The dreaded moment arrived that I finally wrapped my prop in a floating line, and when else then on a windless, moonless night at 1 in the morning, and due to my kindness, now only 3.8miles off a rock face of a coast line. I touched my wife’s soft dream filled face and whispered as calmly as possible. “babe….. We kinda have a problem. I’m gonna need you to wake up and put Ellia down… I think I have to get in the water!” I don’t even think she said much she just got up and awaited my thoughts as I assessed all the info. We had a small amount of forward speed due to the jib now being up, and is asked her to watch our heading as I got everything ready for my terrifying midnight dip. All she uttered was “do you want to put swim shorts on first?” Funny thing is is that was so encouraging. It was the best thing she could have said to me because it made me feel like she had faith in me to sort it out, that she wasn’t freaking out, and that she agreed that it had to be done. I think she may have still been sleeping. Out came the goggles, the snorkel, the fins, and a recently “still broken” underwater light…. No way was this going to be possible without an underwater light. So I scurried around and found an emergency light that I had bought with Jordan in 2005 for scuba emergencies. I had never changed the batteries and click! She was a beam of hope! I pulled in 150+ feet of thin blue nylon rope with no crab pot at then end and the other end stuck under my boat. Genevieve had me throw a line off the back of the boat to grab if I felt I was drifting to far and I started to take the deep breaths that are often accompanied with the thoughts such as ” OH GOD” and “what the hell am I doing”.

We quickly rolled in the jib and I jumped into the abyss with a light, a line, and a knife in hand. I held on and asked how fast we were moving as I felt I was still being drug pretty good. She told me we were floating at 1.8kts with the waves. Faster then I had hoped. I stuck my head under water a few times, watched the back of the boat rise and fall over 4 feet with each wave and thought to myself, “Wow….this is really dangerous”. And that’s when God cut me a little slack. With the dimming light I was able to see that the rope had not actually entangled the prop but rather that it was caught on the underside of the rudder!  This was about as good of news as we could get all things considered. I yelled for Genevieve to come and grab my knife and pass me a gaff so I could try to push it off without getting too far under Necesse’s hammer of a stern. Genevieve daringly hung off the back of the boat and as we made the exchange the underwater light flickered out. I would have made another “OH GOD” gasp but my head was in and out of the waves too often that I figured he could just read my mind on this one. And then the light turned back on with a handy man tap. I made a few attempts with the gaff but it wouldn’t budge. I looked at it a while as best I could and then realized and yelled to Genevieve ” cut the end of the rope that I attached to the boat!” I few seconds later she made it through and I watched the white ball buoy float up the side of the boat taking the remainder of the line with it and floating off into the distance. I managed to climb up the rudder to our ladder, re-enter the cockpit and calmly reengage the motor with a sigh of relief and the words of my wife ” are you going to dry off?”

The girls never even woke up.

Thank you for your strength and courage Genevieve. You are most amazing.